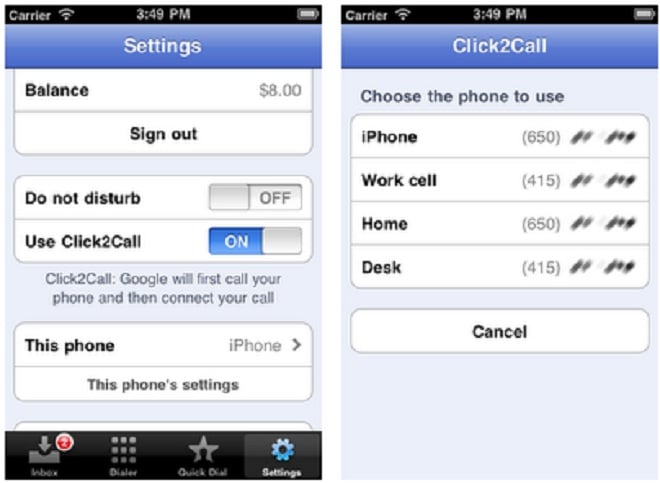 The feud between Google and Apple over Google Voice appears to be over, as the app has been approved for the iPhone already and it now supports the iPod touch and the iPad. That’s right, Google is now turning your other iOS devices into free text-messaging machines.

While the iPod touch and iPad can’t make cellular calls, you can use the Google Voice app to initiate calls with the Click2Call feature. This enables you to pick which phone you want to use to initiate a call and Google Voice will ring that one for you and connect with the number you’re trying to reach.

– When you enable Push Notifications, we will automatically disable Text forwarding for you, so you won’t receive multiple notifications.
– Want some quiet time? You can send all callers straight to voicemail by turning on Do not disturb in the Settings tab.
– We made it easier for you to place calls from the address book by adding a dedicated Contacts button to the Dialer tab.
– Sending text messages is now more streamlined since you don’t need to press the OK button anymore.

If you recall, this app from the search giant was the subject of a showdown between the tech titans. Google submitted the app and it was never approved (third-party programs were also pulled) and many thought it was at AT&T’s insistence because of the free text messaging capabilities and the cheaper international calls.

A federal probe shows that the decision was all Apple’s, as the company felt the program duplicated existing functionality and could confuse users. The iPhone maker has softened its stance regarding what it lets in its App Store – part of this could be due to the fact that it doesn’t want to deal with too many governmental inquiries.

You can download the Google Voice app for the iPhone, iPod touch and iPad here (iTunes link).

The Android and iPhone war still rages on, but some new stats put an interesting spin on just where the...