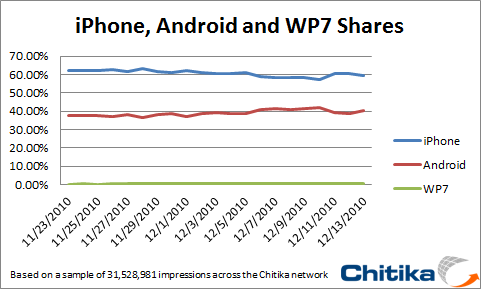 Windows Phone launched in the late fall and the mobile operating system is not yet making a dent in web traffic, according a new report out of Chitika. In the months since launch, Windows Phone has topped out at a mere 0.45%, a number that is about 100 times less than Android.

The top mobile platforms are iOS and Android, which account for about 60% and 40% of the traffic on Chitika’s network, respectively. Chitika is an online advertiser that compiles operating system information from visitors that browse websites belonging to Chitika’s advertising network. These calculations are based on 31 million impressions across the advertiser’s network between 11/23/2010 and 12/13/2010.

These numbers show that Windows Phone has along way to go before it becomes competitive as a mobile platform. One problem that Windows Phone needs to overcome is distribution. Currently, WP7 handsets are only available T-Mobile and AT&T in the U.S. The two carriers offer a total of five handsets including the Samsung Focus, LG Optimus 7, HTC Surround, HTC HD7, and the Dell Venue Pro. Windows Phone is noticeably absent on Sprint and Verizon, the #1 carrier in the U.S.

The rollout of Windows Phone on the CDMA carriers, Sprint and Verizon, is expected in early 2011 and may help to boost these low traffic numbers. The timing of this launch is critically important as the iPhone is rumored to landing on Verizon in early 2011. If Microsoft tries to launch its CDMA handsets after the iPhone, it will have an uphill battle to gain additional market share.

Dell Venue Pro to arrive next week, if you ordered by the 14th

The saga of the Dell Venue Pro continues with Dell reportedly now claiming Venue Pro handsets ordered by the 14th...