The ViewSonic G tablet is one of the few Tegra 2-toting Android tablets that you can buy at the moment, but you won’t be finding it at Staples anytime soon. Yesterday we heard that the tablet may have been pulled because of a manufacturing error, but that’s not the case. According to ViewSonic, the G tablet was pulled due to a “user experience issue”. As an owner of a G tablet, let me be the first to tell you, “No Shit”.

The G tablet ships with a customized user interface called Tap and Tap, and to put it nicely, it sucks, big time. Yes, that’s putting it nicely. Given the specs on the thing, (Tegra 2, 16GB internal memory, MicroSD card slot, Android 2.2) the G tablet should be awesome. Unfortunately, the UI cripples the entire G tablet experience, which prompted me to side-load a home replacement app. But for those who did their research on the tablet, that was likely their intention from the get go. I’ve been running Launcher Pro on my G tablet since day one, and I’m very impressed with it.

Then there are the custom ROMs for the G tablet, which are very much still in beta, that bring a solid Android experience to the plagued device. There are two ROMs being actively developed, and one (broken) port of CyanogenMod. The most popular is called Vegan-Tab, and improves the user experience in so many ways that you’ll likely never want to return to the original ROM, even if you have a home replacement. Best of all, after doing benchmarks between the two ROMs, the custom ROMs essentially doubled every benchmark score that the tablet’s stock ROM managed to post. With custom software, the G tablet managed to post over 2400 on Quadrant and easily achieved 48 FPS on Neocore.

It seems ViewSonic finally realized that the stock software sucks, as a software update should begin to push out sometime before the end of this week. Viewsonic’s VP of Marketing Adam Hanin told Engadget that it’s basically Google’s fault for lack of support of bigger devices with larger displays, and that they have to come up with their own software and app stores because of this. Well, that may be true, but it doesn’t mean you have to create bad software to run on top of your product, and then be surprised that people don’t like it. Instead of making a custom UI, Viewsonic could have slightly skinned the stock Android UI and people would have liked it more than the crap that’s on the thing now.

In the end, it’s sort of exciting that ViewSonic has realized the error of their ways, but I’m still doubting that an update will make me want to go back to the Tap and Tap UI. Still, if the Tegra 2 does end up being the design reference for Android Honeycomb, then the G tablet may have some life in it yet. Honeycomb on the G tablet, here we come!

You should also know that Viewsonic’s upcoming update may have been found already online, and it looks to be quite a big big update at that. ViewSonic has toned-down their UI, and it’s a huge step in the right direction. We’ll keep you updated as we hear more about what’s inside, but here’s a picture of the new launcher to look at for now. 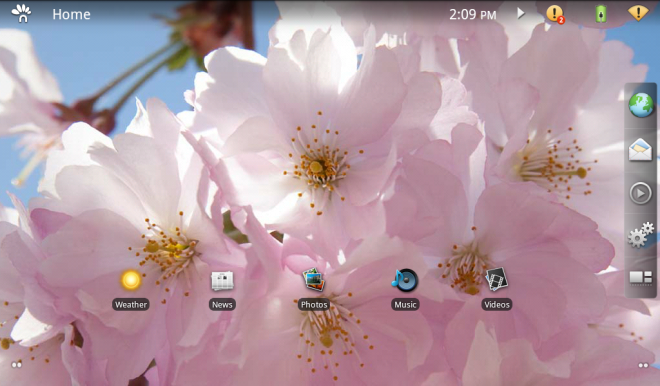 Motorola Droid and Droid Incredible getting some Gingerbread love

Whether officially or unofficially, the Gingerbread version of Android - or 2.3 - is making its rounds. This morning we...