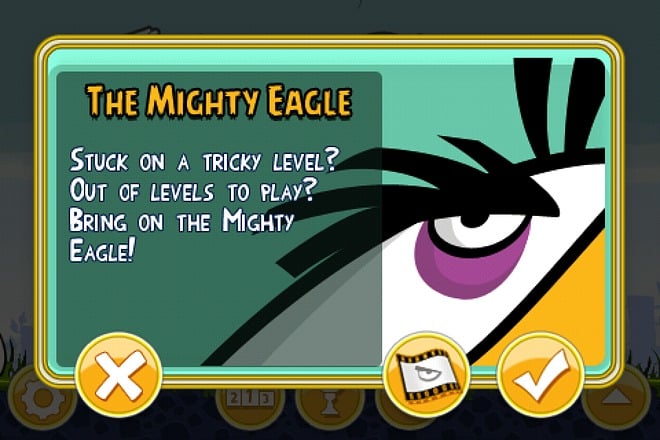 The runaway hit app for the iPhone and iPad this year is undoubtedly Angry Birds. The app has been downloaded approximately a bazillion times and has killed productivity everywhere for the year 2010. Rovio has given us Christmas/holiday versions along with a creepy Halloween version of the avian-versus-swine game. Now, before the year is through, a new update delivers the mega-bird that made its debut on Symbian: the Mighty Eagle.

Do you love Angry Birds but find it difficult to make it through some of the levels? That’s what the Mighty Eagle character is for. Whenever you find the pig fortresses to be a little overwhelming, and you become infuriated with their snorting and mockery of you, just tap the Mighty Eagle icon up top and a can of tuna will appear on the slingshot. Hurl it at the piggy fortress and out comes a big, whopping, ass-kicking bird that just stomps the hell out of everything, leaving the entire place one giant pile of destruction and disarray.

Of course, this new feature, which might make you giddy every time you use it, is going to cost a pretty penny. Or ninety-nine. When you update the app, you’ll be asked if you want to purchase the Mighty Eagle character for just 99 cents from the iTunes App Store as an in-app purchase. Select yes – come on, it’s only a dollar – and you’re just hours away from making the game boring because it just becomes so damn easy.

If you haven’t downloaded Angry Birds for your iPhone, iPod touch or iPad yet, you’ve been missing out. Go on and grab it now. Otherwise, if you’re the type that can’t go to sleep at night without seeing those flying woodpeckers burned into your retinas, you can update your game now with the new character.

Path has been one slick photo-sharing app so far. It allows you to snap photos with your iPhone and share...