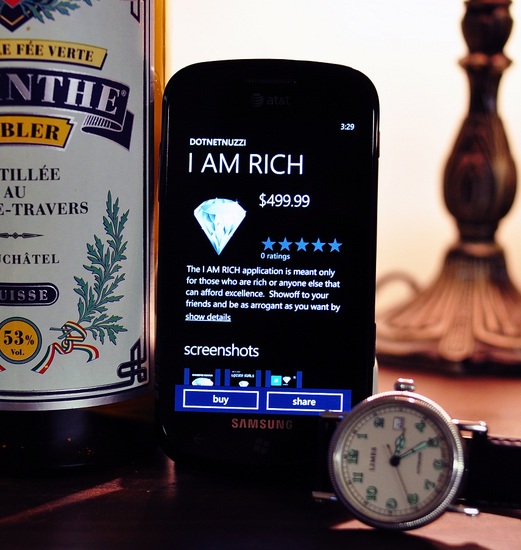 I Am Rich, Pocket God, and Fruit Ninja, three popular iOS games, are all landing on Windows Phone. The trio of games are an exciting addition to the Windows Phone marketplace which has now climbed to over 3,000 applications. While each game is notable on its own, the fact that all three have landed on Windows Phone is significant.

These developers are well established on the iOS and ANdroid platform. They are obviously making money off their games, especially the iOS versions. The developers would not spend the time or money to move to another platform unless they considered the platform to be worth their investment. Yes, Windows Phone is nascent, but it has potential and it is this potential that has spurred many developers to jump on board with Microsoft.

Microsoft has also created a developer-friendly suite of tools to help in mobile development. Windows Phone is based on XNA and Silverlight so any .NET developer worth his salt could, with relative ease, create an application worthy of the marketplace. Microsoft has also created a suite of tools, Visual Studio 2010 Express and Expression Blend 4 for Windows Phone, that are available for free. Once you pay your $100 developers fee, the rest is easy.

As for the games themselves, I am Rich is the now $499 sensation that lets you proclaim to the world that you have more disposable income. Pocket God is an Xbox-enabled game that lets you assume the position as the divine ruler over a primitive island and its inhabitants. Finally, there is Fruit Ninja which lets you exact vengeance on unsuspecting fruit by cutting them in half with a touch-controlled blade. fruit Ninja is another Xbox Live game which means you can unlock achievements, earn gamer points, and share your gaming stats with others on the Xbox Live leaderboard. .

[Via wpcentral and wmpoweruser]

The previous 12 months have seen the mobile space grow by leaps and bounds as superphones went from being rarities...