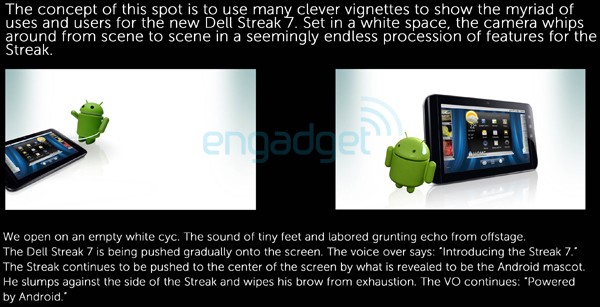 A leaked treatment from an in-production Dell television commercial paints a brief, but exciting picture of the rumored Dell Streak 7. The graphical outline suggests the 7-inch Android tablet from Dell will keep both the Streak branding and the naming convention of the original Dell Streak 5. The 7-inch tablet will also include a Gorilla glass touchscreen, built-in GPS, social networking integration, new Blio reader, and Dell Stage, a custom Android UI.The Streak will be advertised with the new “You can tell its a Dell” slogan.

This rumored Android tablet from Dell will be a worthy competitor to the Samsung Galaxy Tab, but how it will stack up to Motorola’s upcoming tablet remains to be seen. The Motorola tablet is expected to feature a dual-core Tegra 2 processor, a 10-inch display, and Android 3.0 Honeycomb. It ups the ante for Android tablets and may be the tablet to have when it launches in early 2011. The Streak 7 will enter the marketplace as one among many in the 7-inch category.

The Streak may compete directly with the Galaxy Tab, but the Galaxy Tab has a big head start. Earlier this month, the Galaxy Tab hit the big 1 million sold mark and is on target to reach 1.5 million by the end of the year. The Tab has excellent retail reach and is available, here in the U.S., from several major wireless carriers including T-Mobile, AT&T, Sprint, Verizon and U.S. Cellular. If you are looking to snag a Tab int he U.S., you should check out U.S. Cellular. The wireless carrier recently discounted the Galaxy Tab to $199 after mail-in rebate and with a minimum $55 monthly data plan and two-year contract. Hypothetically, if all three tablets were available today, which one would purchase?