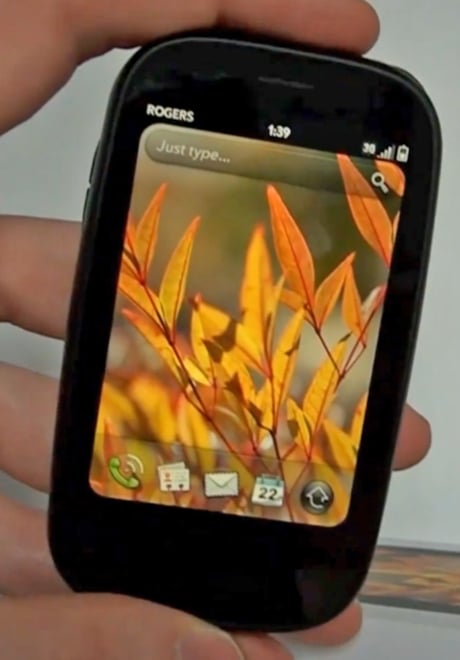 This week, Rogers went live with the Palm Pre 2 for $99.99 on a three-year contract, and since we’re still waiting on a Verizon launch, I thought y’all might like to take a peek at the device. Just to recap, the Palm Pre 2 updates the Pre Plus with a 5 megapixel camera, 1 GHz processor, and webOS 2.0, but has the same ol’ HVGA display, 3G, Wi-Fi, and GPS. Aside from the front glass screen and a slightly bigger keyboard, the exterior hardware is pretty much the same.

I can’t comment too much on the new features in webOS 2.0 since I’ve spent so little time on the Pre Plus, but some of the changes include stacked cards for easier multitasking, upgraded universal search which can now launch into actions like starting an e-mail or status update, and Exhibition, which changes how apps behave if they’re on the Touchstone wireless charging dock. Of those, I’ve found Just Type to be the most interesting, and I really hope that RIM shamelessly copies the universal search to universal action transition for BlackBerry.

The software experience overall is pretty snappy, barring the odd hang-up. Multitouch zooming is highly responsive, app switching very quick (especially with multiple cards on one screen now), and the UI remains as elegant and unique as ever. I still find it a crying shame that webOS isn’t more popular; maybe catching up on the processor front will stem the usual criticisms for Palm’s hardware, though the elite will still scoff at any screen smaller than 3.5 inches and a resolution less than WVGA. One thing I forgot to mention in the video that the Pre 2 gets major bonus points for is running Flash in the browser, though it would be nice if you could zoom in on Flash elements for full-screen implementations implementations.

After using it for about two days, I’m really happy with the Pre 2, though there are still some gaping software holes. For one, I can’t understand why there’s virtually no Twitter integration. It’s there as a search engine in Just Type, but there’s no integration with contacts like Facebook, no official app, and the only free third-party one has sketchy performance. Speaking of Synergy, I’m surprised Windows Live services aren’t here; with Google and Yahoo! there, I would expect at least some Microsoft love would be in there too. AIM is prominent, but only for the messenger, not so much e-mail.

Back to apps, Google Maps comes preloaded, but still no Latitude location-sharing support. A few of my favourite apps, like Poynt, Vlingo, and Glue are noticeably absent, but I can hardly blame them if there are so few people with webOS phones out there.

Anyway, without further ado, here’s our unboxing. Stick around for the full review, hopefully some time before CES.

Invitations are going out for a Sony Ericsson event that will introduce "the new members of the Xperia family" on...