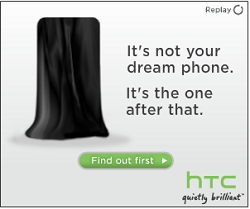 We know that HTC is preparing a smartphone for the Verizon 4G LTE network and the ad picture in this post indicates that it could be called the Thunderbolt 4G.

We have previously seen this device when it was code-named Mecha and some thought it would be called the Incredible HD, but this ad sends users to a page with the name “Thunderbolt 4G” in the URL, so that’s some solid confirmation. In all likelihood, the HTC Thunderbolt 4G is the device it has been teasing for a Jan. 6 CES unveiling.

Early leaks suggest this will be a boosted version of the EVO, as it will sport a 4.3-inch display and it will be compatible with the Verizon 4G LTE network, which has been giving uses 6-8 Mbps download speeds on average. We also expect it to have the Sense UI and we’re hoping it will have Android 2.3 Gingerbread but it will likely launch with Froyo.

Other than that, you can expect all the things a high-end smartphone has like WiFi, Bluetooth, GPS and other features. The Thunderbolt 4G will likely be pushed hard as a top-shelf smartphone because of its ability to use Verizon’s next-generation mobile data network.

The HTC Thunderbolt will be just one of many smartphones we expect to see at CES which can take advantage of next-generation mobile data network, as we’re expecting Samsung and Motorola to also show off Verizon smartphones. This won’t be HTC’s only device either, as it is widely expected to show off the Shift, which will have a full QWERTY keyboard and support for Sprint’s WiMax network.

I’d also expect a tablet or two to be shown which can use 4G, as the Motorola Android Honeycomb tablet may steal the show but we also should see some HSPA+ tablets for T-Mobile.

We’re going to be at CES busting our humps to give you up-to-the-minute coverage, so keep it tuned here.