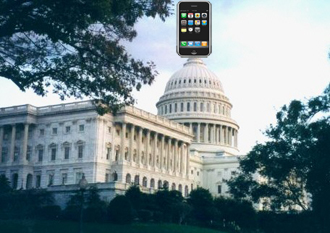 Republican legislation will soon allow electronic devices for the first time in the U.S. House of Representatives, according to The New York Times. In a document known as the Speaker’s Announced Policies, it is proposed that “Members may use an electronic device on the House floor as long as it doesn’t ‘impair decorum.'” A Republican spokesman Brendan Buck said that “This is not free license to Skype or pay bills online. But we recognize that people consume information electronically these days. It’s just silly that the House wouldn’t accommodate that.”

Apparently, efficiency is quoted as a reason to use electronic devices such as smartphones and tablets in Congress. The idea is to give lawmakers the ability to fact-check a colleague’s statement on the spot or to keep up with the news.

On the other side, one could easily envision congressmen and congresswomen playing some third-party shooter during the session, effectively “Doom-ing” the debate in every sense of the word. Hopefully, that won’t happen and after few circles in multi-player capable Real Racing 2, everyone will get back to business. 😉

It's been a busy year for BlackBerry, especially at this tail end, what with the PlayBook tablet and all. Before...