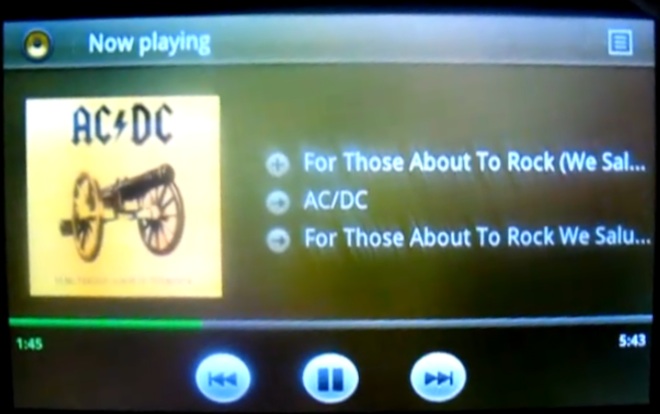 One of the things many keen eyes noticed at the recent All Things D Mobile conference, where Andy Rubin, the father of Android, showed off a Motorola tablet prototype, was the lack of any hardware buttons on said tablet. Andy said that in the future he expects all smartphones and tablet like devices to be nothing more than a piece of glass with only one button, the screen lock/unlock button. Such a future would require a user interface overhaul and a new video that has cropped up on the internet showing off an unreleased version of Android’s music player shows us some of what we can expect. Notice how the albums now appear in much the same way that the Android photo gallery application presents them. Also take note of how the interface is controlled by tapping a menu icon at the top right of the status bar. Frankly, we can’t wait.

All smartphone operating systems, whether it be Nokia’s Symbian, Apple’s iOS, Palm’s webOS, need buttons to do things, and we think that’s silly. Devices should be as small as possible, have little to no bezel, and everything you need to do should be nothing more than a tap away. Hardware buttons are nice, but they take up space. Capacitive buttons, while less prone to failure, also take up room. If you’ve got an iPhone or iPod touch around, take a moment to examine it. Imagine how much smaller it would be if the top and bottom chunks of black were sliced off and all that would be left is that giant gorgeous high resolution 3.5 inch screen?

Andy isn’t the only one talking no button device. Nokia is refreshing the MeeGo user interface to be unique and unlike anything the market has ever seen; Marko Ahtisaari, Senior Vice President of Design and User Experience at the Finnish firm, gave a talk at LeWeb where he hinted that a no button future is where the world’s largest handset maker is also heading.

Starting with Android 2.3 Gingerbread ext4 will be the default file system

File systems are a topic no one really likes to talk about since they're technically complicated and not really worth...