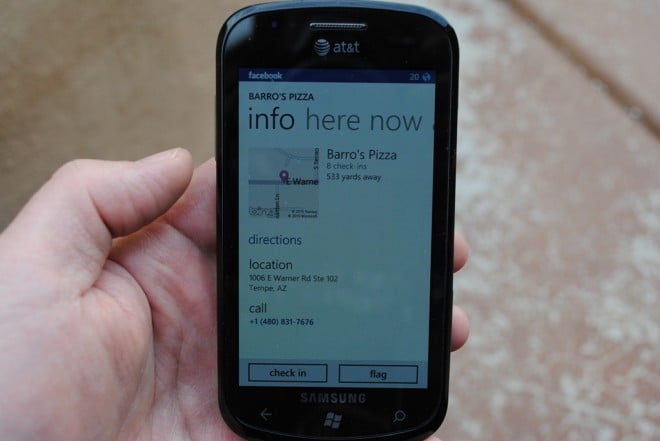 Not to be left behind by the more established mobile platforms, like Android, iPhone, and BlackBerry, the Windows Phone Facebook app now supports Places, letting you check in to specific spots based on your GPS coordinates, and share where you are with your friends online. Windows Phone wasn’t entirely left in the dark for social check-ins of the sort until now, though; Foursquare was available right out of the gate and could share to both Facebook and Twitter without any problem. On top of Places, you can now tag friends in pictures you upload from your phone.

Facebook Places earned some ire when it allowed folks to check in friends after permission was only given once, but it seems like that feeling has mostly subsided. If you’re still nervous about sharing something like your location, there are a whole series of privacy controls available on the social network for you to control who sees what.

It’s good that a popular and important app like Facebook is staying up-to-date with the newest features, since its performance will mean a lot to potential buyers. Though there are still a few sticklers who make a point not to make an account, odds are if you’re in the market for a smartphone, you’re on Facebook in some capacity. There are still some redundancies between the standalone Windows phone app and the preloaded People hub, so if you’re just a light user, you could probably skip the app.

To get downloading, hit up the Windows phone Marketplace on your device.

Although you can buy wine and champagne glasses in Ikea stores, we don't usually think of the Swedish furniture retailer...