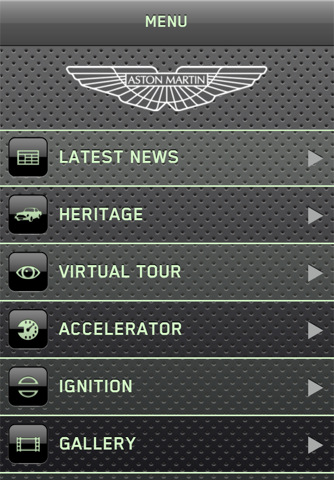 British car manufacturer Aston Martin, makers of the fine automobiles that get James Bond all the ladies and save him from the stickest of situations, has released an iOS application that gives people obsessed with the Aston Martin brand, but may not be able to afford their products, a chance to experience the legendary cars. With the app you’ll be able to keep up with what Aston is up to, view videos of their latest whips, hear their V8 and V12 engines, if you’re into that sort of thing, and have a direct connection to their Facebook and Twitter social media channels so you can retweet to your hearts content about how much you want a DB9 with all the trimmings, but don’t have anywhere near the amount of dough required to buy one.

Was this application a waste of both time and money? You bet, but brands want to have a presence on the Jesus phone so they can somehow prove that their hip. The people who do buy Aston Martins, they probably don’t really care about whether or not they can watch videos of upcoming models. They most likely get invitations to test drive the latest vehicles before they’re made available for sale to the general public.

Other car makers such as Volkswagon have released racing games that feature their signature hot hatchback GTI model, and let’s not forget the BMW and Mini Cooper iPhone apps that integrate into the onboard computer system. Will we see more of this type of marketing/gimmicky attempts at luring customers? As much as I’d like to say no, it’s only going to get worse. This is product placement taken up a notch. It’s feeding the grown men who still act like 12 year boys that have posters of concept cars hanging up on the wall.

Not that there’s anything wrong with that … who am I kidding? It’s miserable.

Since switching to the iPhone 4 about 3 months ago, I've yet to figure out if I like it enough...