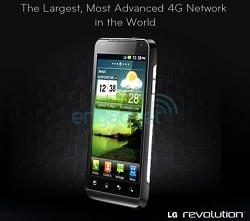 We’re live from CES in Las Vegas and our friends at Engadget managed to get their hands on a few of the promotional material from LG Electronics. The world’s third-largest phone maker is looking to make a big splash at CES by introducing a 4G phone called the Revolution and a super slim smartphone that’s going by the Optimus Black label.

This device is likely a lock for Verizon’s 4G LTE network, which should have at least three smartphones at this show and a tablet or two. We don’t know much about the LG Revolution with 4G but even if it’s just an Optimus 2X with LTE, we’d be very excited.

While there’s no confirmation, I wouldn’t be surprised to see the LG Revolution with 4G pack a dual-core Tegra 2 processor, be powered by Android, sport a large capacitive touchscreen, loads of internal memory and the ability to access Verizon’s next-generation mobile data network.

This won’t be the only phone which can utilize the Verizon 4G LTE network at CES, as we will likely see some devices from HTC, Samsung and Motorola. It’s an exciting time for mobile data fanatics but we’re still wondering what this will be costing us on a monthly basis.

The other LG Optimus Black device boasts that it is “innovatively slim” and that it will sport a great display, so we’re fairly certain that this is the B phone we saw a little while ago. That Android device was slimmer than an iPhone and boasted a brighter screen.

These are really exciting devices … if the pieces all come together. Luckily for us, LG has a press conference tomorrow morning at 8 a.m. PST, you can be sure we’ll be live blogging it, so keep it locked here for the latest super duper phone news.

We have our fingers crossed for the launch of Sony Ericsson's PlayStation phone at CES, but even if it doesn't...