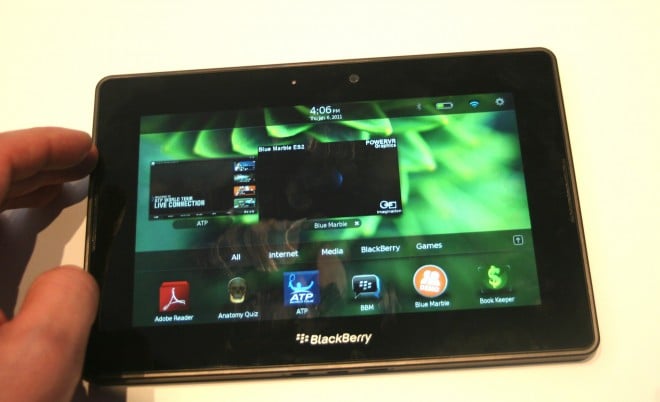 We’ve finally got some extended time with the BlackBerry PlayBook and we’re pretty excited about this upcoming tablet and feel like it could be a credible competitor to the Apple iPad and the Motorola Xoom.

The BlackBerry PlayBook has all the goods on paper: a 7-inch high-resolution display, dual-core 1 GHz processor, WiFi, 4G on Sprint, Bluetooth, (Sorry folks, jumped the gun on GPS), multiple high-definition cameras and other bells and whistles. There are only a few buttons on this device for power and volume and there’s also an HDMI-out connector as well as a dock connection.

We initially thought the large bezels around the screen could be unneeded but these are utilized in effective ways. Because there are no home or back buttons, you just use these touch-sensitive bezels for you navigation needs. Swiping up with pop you out of the app, swiping from the top will bring up the menu and the swiping from the side lets you toggle through apps.

The BlackBerry PlayBook is remarkably made, as it feels like a premium device but still weighs less than a pad. I’ve been rocking a Galaxy Tab in my front suit pocket during CES 2011 and really wished I had a BlackBerry tablet instead just for the aesthetics alone.

Like your parents probably told you, looks aren’t everything and I’m quite impressed with the software on the BlackBerry PlayBook, which is being crafted by QNX. It seems to bring some of the best elements of iOS, webOS and the traditional BlackBerry. Things were running fluidly and it has the processing capabilities to even run videos as background apps if you wanted to, although I don’t why you would.

It is still a very app-centric experience and that might be a bit of a change for die hard BlackBerry users but it seemed intuitive enough that those users won’t mind. The browser will have support for HTML5 and full Adobe Flash, so you can expect it to work with all of your favorite sites. The WiFi-only BlackBerry PlayBook I used loaded up cool sites like IntoMobile.com easily and the responsiveness of the screen was just right.

One issue that I’m not understanding it looks like there won’t be a standalone e-mail client. Instead, they want you to Bluetooth tether bridge your BlackBerry smartphone to the device. This makes sense for some corporate clients who would just rather manage one device – there’s no data left behind on the tablet itself – but casual users may not dig this. Sure, you can go to web clients through the browser but I’d still like one.

We’re going to see a ton of cool tablets over the next few months, as Apple is looming with its iPad 2, the Motorola Xoom, Palm’s upcoming device and more, but my time with the BlackBerry PlayBook has me thinking that device quality won’t be an issue with this thing. It’s going to come down to the unknown pricing, availability and marketing.