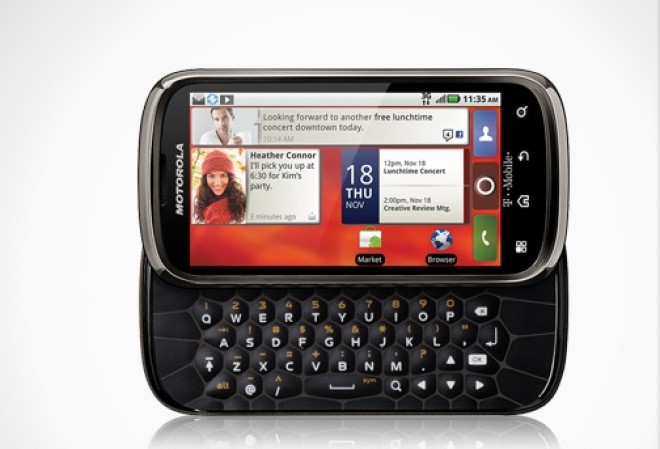 We’ve been waiting for something official to come of the Cliq 2 and today seems to be that day. Along with the Xoom, Atrix 4G and the Droid Bionic, Motorola has officially announced the successor to their first Android phone ever. Even with the beefier specifications on board, will the Cliq 2 appeal to the masses?

While you’re done drooling over the Atrix 4G and the others, you can then lend your attention to the Cliq successor. The Cliq 2 is an Android 2.2 Froyo device with MotoBlur, sports a 3.7 inch display, 1GHz processor, and a unique slide-out keyboard that looks very much like a spider web. This keyboard is said to be easier to bang out messages on the go, and hopefully it lives up to that. This bad boy also comes with a 5 megapixel camera with a dual LED flash, and of course, T-Mobile HSPA+ support, making it the 3rd device of Magenta’s 4G portfolio.

MotoBlur also has seen some upgrades, one of which is that you can switch between profiles, much like HTC Sense’s “Scenes” option. You can switch from weekend mode to work mode, and have all the applications that are important to you most during those times right with a cliq of a button. This is a great option to have, even if you may not use it every day.

So while the Cliq 2 may be the least impressive of the four devices Motorola announced today, but we’re glad that we’re seeing a sequel to their first Android device. While I wish that MotoBlur wasn’t loaded onto this thing, we can’t win them all, and it looks like it won’t be dying off anytime soon.

Luckily the Cliq 2 will likely be seeing Android 2.3 Gingerbread sometime down the road. We know how slow updates can go with customized user interfaces, but better late than never!

Here’s to the revival of the Cliq line. May your sales do much better than your predecessor.

Anyone looking to grab one of these guys?

Nielsen released a really great infographic the other day, going over a variety of U.S. media usage statistics, including mobile...