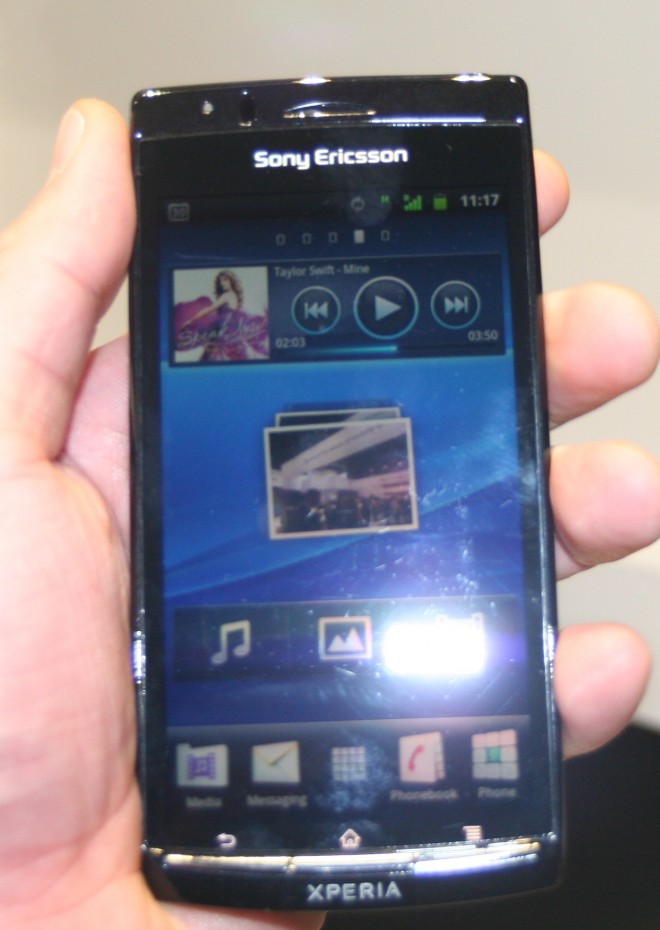 Sony Ericsson just announced the Xperia Arc phone and we were able to get our hands on the upcoming Android Gingerbread device.

I reviewed the X10 and felt that the hardware was beautiful but the software wasn’t up to par. While I only had about twenty minutes with the device, I’m wondering if the hardware will be the thing that lags with this one.

It’s not in the looks department though, as the Xperia Arc is gorgeous with its 4.2-inch display and at only 8.7 millimeters thick it will fit even into the skinniest hipster jeans you can find. The nice matte finish of the back makes it feel comfortable in the hands and that display really pops.

The company is calling the Xperia Arc screen the Reality Display and it takes cues from Sony’s Bravia televisions. It’s an 850 X 480 display – which isn’t top of the line right now – but you wouldn’t really notice it when watching videos or surfing the web. While I still prefer the Retina Display or the Super AMOLED, this is nice screen.

It runs a 1 GHz Qualcomm Snapdragon processor and that’s actually pretty powerful but I wonder how it will stack up against the dual-core monsters we’re seeing from Motorola and others. It’s either great or insane that we consider 1 GHz processors in phones old hat now.

The software on the Xperia Arc should run like butter, as the company has layered its TimeScape UI on top of Android 2.3 Gingerbread. While I’m not in love with some of the UI choices of the Xperia Arc, the underlying OS should mean that it will be fast and responsive.

The Xperia Arc also packs an 8.1-megapixel HD camera, WiFi, Bluetooth, GPS and all the other goodies you’d expect from a device like this. I asked about 4G integration and the company remained coy, so we’ll know for sure when it’ released in the first quarter.

Check out our hands-on photo gallery. HD video footage will be posted shortly. Please bear with us.

Verizon and Samsung announced in their CES press conference today a handful of devices, including a one referred to as...