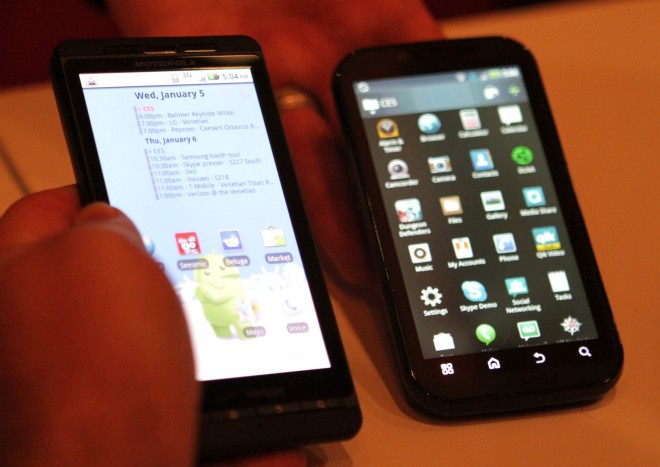 Motorola is really trying to impress us with its 4G offerings, as it followed up the introduction of the cool Atrix 4G with the stellar Droid Bionic with Verizon 4G LTE.

Like the Atrix, the Droid Bionic has a dual-core Tegra 2 processor that can be pushed up to 1 GHz but this super phone for Big Red only has 512 MB of RAM, compared to the full 1 GB in the AT&T device.

The Droid Bionic has a 4.3-inch qHD display that bests the Motoroal Droid X’s likewise huge display, and the brief videos we saw playing on the screen ran smoothly and looked crisp. I wouldn’t go and dethrone the Retina Display and the Samsung Super AMOLED but it’s not bad by any means.

On the back is a soft matte plastic finish that makes this super phone quite comfortable in the hand. It definitely looks like it’s in the same family as the Droid X but the software edges and light feel in the hand may be more appealing to people who found the X to be too imposing.

I didn’t have a chance to verify which software it was running but it looked like Android 2.2 with MotoBlur. Let’s hope that the Droid Bionic gets some Gingerbread love before it hits the streets.

You’ll also find a front-facing camera for video chatting and an 8-megapixel camera on the back. So is the Droid Bionic better than the Atrix? I don’t know, as the Atrix seems to have better specs but the Verizon 4G LTE support may make the Bionic more appealing because we’re not sure how fast AT&T’s 4G will be yet.

In the meanwhile, the Droid Bionic with Verizon 4G LTE looks like it will be the first of many dual-core super phones we see this year and we can’t wait to see what the competition has up its sleeves. It’s going to be difficult to top the devices Motorola is showing off but I’m sure many other handset makers will try their best.