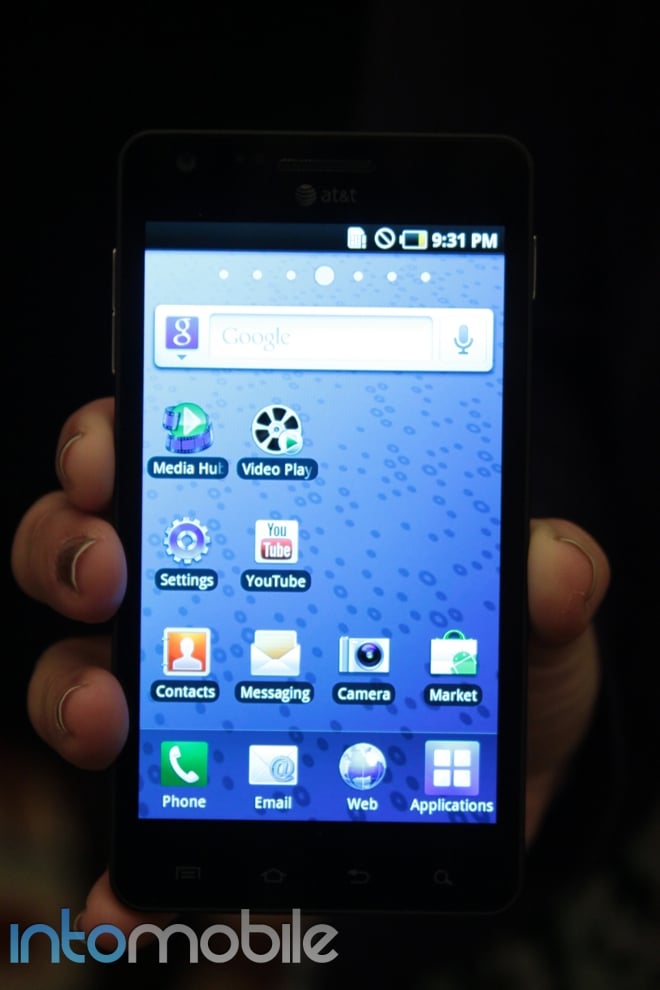 AT&T made a big splash with the introduction of the Samsung Infuse 4G and we got to check it out with our HD video camera.

Unfortunately, we weren’t even allowed to hold the Samsung Infuse with our own rugged hands, as the device is still quite early but we did get a nice little overview of what could be one of AT&T’s best Android phones this year. Like the unnamed Samsung Verizon 4G LTE phone, the Infuse 4G sports the Super AMOLED Plus display and this thing is gorgeous and huge at 4.5 inches. It produces 50 percent boost in sub-pixel count. Images were bright and vivid and I just can’t complement this screen enough.

Because it’s using HSPA+ for its 4G, it doesn’t have to deal with the bulk of an LTE chip, so the Samsung Infuse 4G is one skinny thing at 9 millimeters. While the screen is massive, it looks like a light device that should rest in the hand pretty naturally.

The back cover isn’t final, so we don’t have much on that but this will definitely fall into the Galaxy S line when it comes to style and design. I think that’s a pretty good thing for the most part.

The Infuse will be powered by a single-core 1.2 GHz processor, 8-megapixel real camera, 1.2-megapixel front-facing camera, WiFi, GPS and the other things you’d expect from a smartphone. This will launch with Android 2.2 and the TouchWiz user interface but it should be upgradable to Gingerbread.

Without getting to dive deeply into the Infuse 4G with hands-on time, it’s too soon to tell if it will best the other 4G phones that will hit the market over the coming months. That big screen is quite beautiful though, so let’s hope that the software and the rest of the design can keep up that excellence.