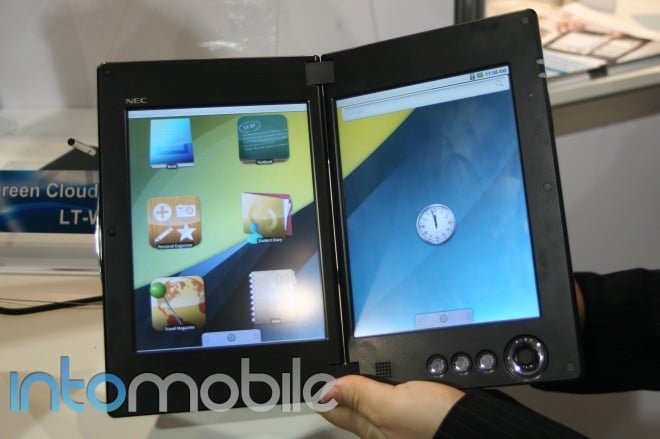 The NEC Android Cloud Communicator LT-W is not being classified as a tablet or an e-reader, as it’s a bit in between. It does feature two 7-inch resistive displays but the company assures us that it will be responsive to the touch. I played around with it a little bit and still miss the capacitive capabilities and the 800 X 600 resolution is nothing to write home about.

So, why the fudge would you want two 7-inch screens on the NEC Cloud Communicator? Well, the company showed us a few apps which could make this useful. As a learning device for students, one screen could be used to watch videos while the other could be used for notes or text.

Because it’s Android 2.1, this thing will have a full Webkit browser and you can even use both screens to browse – you can have each screen be it’s own browser, or have one large extended window where the on-screen keyboard is on one of the screens.

It packs a TI OMAP 1 GHz processor, WiFi and it can also be outfitted with 3G. The NEC Cloud Communicator is supposed to launch with the standard Android Market and the company is also seeking out developers for its own app store which can take advantage of the multiple screens.

The NEC Android Cloud Communicator is probably not going to revolutionize the way we use tablets and the product may never hit the U.S. shores, as it’s slated for a release in Japan in the next few quarters. Check out our photos and we’ll have a video up soon too.

If you really want your tech cred, you should get the Orbotix Sphero remote control robotic ball when it's released...