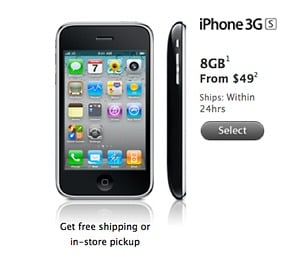 AT&T recently dropped the price of the 8GB iPhone 3GS to just $49 with a two-year contract. That’s not a bad price for a phone that’s still very capable when compared to smartphones on the market today and supports hundreds of thousands of apps available in the iTunes store. Not long after the drop in price, Apple decided to follow suit.

If you’re looking to buy a new smartphone on the cheap, or you’ve been wanting an iPhone so bad but didn’t have the scratch for one, now’s your chance to hop on a good deal. Of course, you’ll be stuck on a two-year contract with AT&T. That might not be such a bad thing unless you’re in an area where AT&T coverage is totally craptastic. Then you just might want to load up that piggy bank a little longer and save for that Verizon iPhone we’ve been hearing so much about.

The iPhone 3GS is still pretty speedy despite being over a year old now, and the camera on it is still pretty damn good even at just 3 megapixels. It has relatively decent battery life and support for AT&T’s 7.2Mbps HSPA network. The only downside is that it comes in black only (my iPhone 3GS last year was white–Jonathan Ive style).

You can get the 8GB iPhone 3GS shipped to you from Apple at no additional charge, or pick one up in store if it’s more convenient.

Mercedes-Benz USA will be launching a new mbrace service in early 2011. Developed by Hughes Telematics, the updated mobile app...