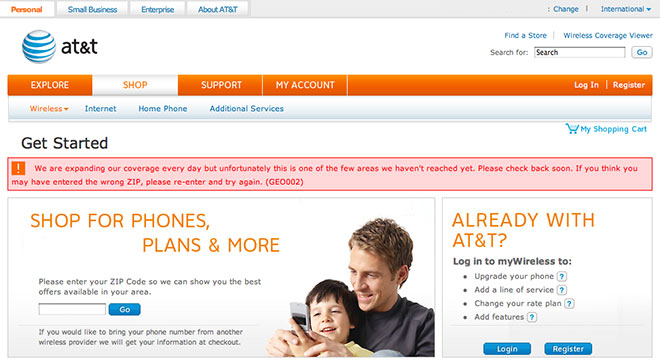 When the Verizon iPhone launches, I will be the first in line to snag the CDMA version of Apple’s popular smartphone. Yes, I realize that the handset will most likely be an iPhone 4 with a CDMA radio. Yes, I realize that the iPhone 5 may be right around the corner, but I don’t care. The iPhone 4 will carry me through until Verizon and Apple release an upgraded version of the smartphone. Why am I so willing to abandon AT&T, possibly cast aside the next generation iPhone and jump on the Verizon iPhone bandwagon?

For me, coverage is king. The iPhone on AT&T’s 3G network may be fast in select locations, switching a SIM between devices may be convenient, and using voice and data at the same time may be desirable, but having coverage everywhere I may travel is much more important than speed, SIMs, and simultaneous voice & data combined. I am dropping all these advantages afforded by the AT&T iPhone, because, in the area in which I live, AT&T’s 3G coverage is nonexistent, while Verizon Wireless’ coverage is almost ubiquitous.

Check out the coverage maps below. AT&T is mostly no coverage (light yellow) or partner coverage (striped), while Verizon is almost all 3G (red). To pick up strong AT&T 3G coverage, I have to drive approximately one to two hours away.

Unlike many of my co-workers, I do not live in a metropolitan area. I live in a rural area. Though rural, it is not remote. I live near a major New England Ski area, the White Mountain National Forest and Mount Washington, one of the biggest tourist attractions in New Hampshire. Yet in all my travels around this tourist-filled area, I am without AT&T coverage in most of my travels.

When I do hit pockets of AT&T coverage, it is EDGE only and not 3G. Verizon’s coverage, on the other hand, is 3G with the occasional pocket of 1xRTT or no service. While Verizon’s 3G service does not rival the maximum HSPA speeds advertised by AT&T, I do get a solid 1.5 Mbps up and 700 kbps up on Verizon. For my usage, these speeds are adequate for web browsing and most internet-based mobile applications. Tethering is also fine at these speeds as long as you don’t try to stream Hulu or watch HD video.

In the end, I am going to choose the device that has the best cellular coverage and that is why I am choosing Verizon over AT&T and the CDMA iPhone over its GSM counterpart. Anyone going to join me?

It's the moment we've been waiting years for: the Verizon iPhone is expected to be announced tomorrow morning in New...