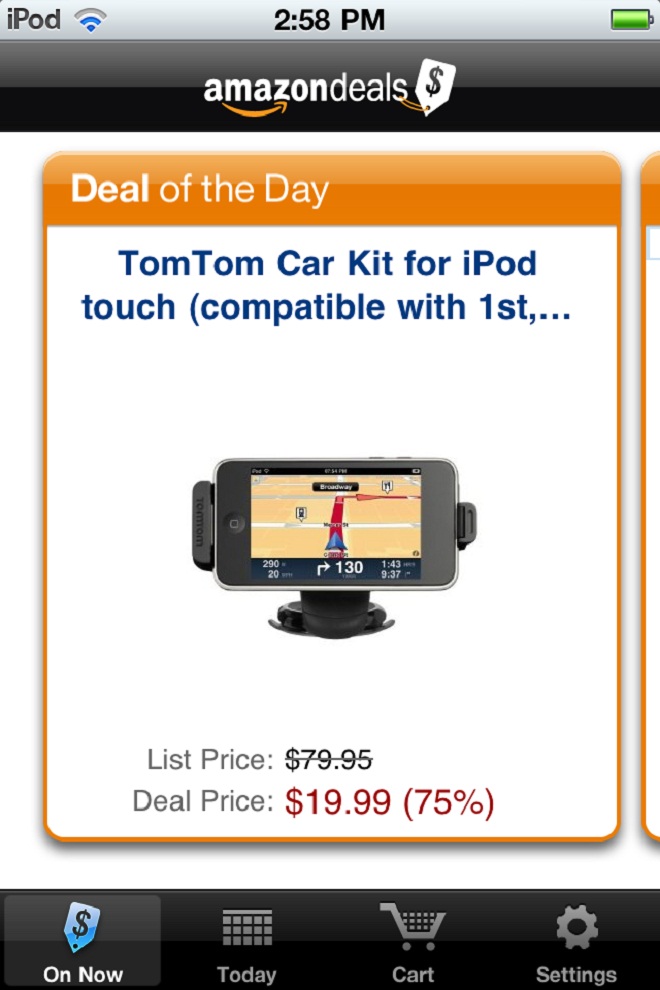 The world’s largest online retailer has just released another mobile app which will make it easier to spend your cash, as the Amazon Deals iPhone app will give you access to limited-availability bargains.

With the Amazon Deals iPhone app (iTunes link), you’ll gain access to the company’s Gold Box deals, which are time-sensitive bargains. One of today’s deals includes an $80 TomTom car kit for the iPod touch for $20.

The Amazon Deals iPhone app is free and it also comes with push notifications to let you know when one of the discounts is going to end. As an Amazon Prime subscriber, you can be sure that I’ve already downloaded it and will likely be checking it most days.

“With Amazon Deals, no matter where they are, our customers can stay connected and informed on deals in their favorite categories and purchase from their iPhone immediately, before they sell out, so they never have to miss another deal,” said Sam Hall, the company’s mobile director, in a prepared statement.

This is just the company’s latest push into the mobile space, as Amazon has seen over $1 billion in sales from mobile devices. It has recently released iPad-specific shopping programs to go along with its numerous shopping apps for the iPhone, Android and BlackBerry.

I’ve found that the company’s apps and Prime can be quite a dangerous combination on my bank account. I’m getting geared up for a weekend trip to Portland and was told by a friend that it would be rainy and cold all weekend. I whipped out the app on my myTouch 4G to get some long johns and a rain jacket and these will be on my doorstep before I head up to the City of Roses.

No word on when this will hit the other platforms but I don’t think you’ll have to wait too long.

What does a Verizon iPhone mean for Android?

The moment many have been waiting for -- the launch of the Verizon iPhone -- is actually happening February 10th,...