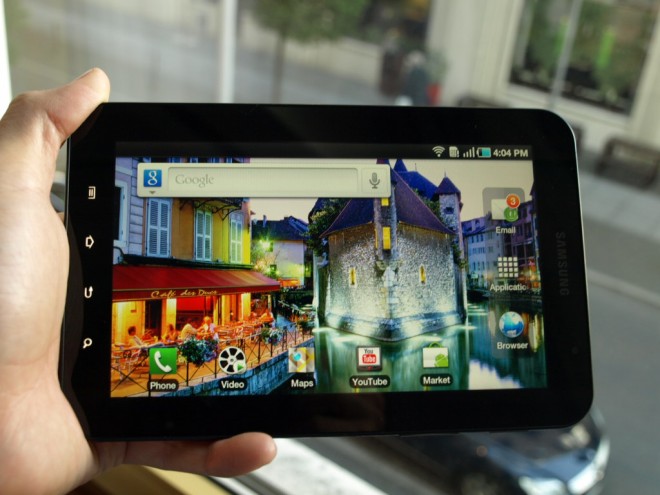 I saw plenty of the Samsung Galaxy Tab at CES this year despite the huge popularity of the iPad. Why? Easy – it’s pocketable and portable. For a brief moment, I was envious and nearly considered buying the Android tablet. Then I decided to wait for a Honeycomb tablet. But for those of you ready to succumb to a portable Android tablet, Sprint is making it even tougher to resist.

Though it’s running Android 2.2 Froyo, admittedly not for tablets, most of my tech nerd friends didn’t seem to mind. One of our own Senior Editors, Marin Perez, carried around a Galaxy Tab in his sport coat pocket throughout most of the show.

“Why carry that thing around? What do you need on that thing that you couldn’t do with your smartphone?” I asked.

There you have it. Sometimes the leap from four inches to seven inches makes the difference between squinting to see content and being able to relax and enjoy a video wherever you go. I use tablets for the same thing, but my iPad always stays at home because – gorgeous and sleek as it is – it’s too heavy to put in a pocket or carry around with me everywhere I go.

Hit up Sprint if you’re thinking of picking up a Galaxy Tab, but note that you’ll be committing to a contract and it looks like Sprint may have some pretty sweet tablets in its pipeline. I’m waiting to see the transformation of the BlackBerry PlayBook myself and see what happens this summer. There are also a number of Honeycomb tablets we’ll be seeing later this year as we’ve learned from CES 2011.

Rope Cut is the Cut the Rope clone for Android

While Android smartphone users are waiting for ZeptoLab and Chillingo to finally bring their super-popular Cut the Rope title to...