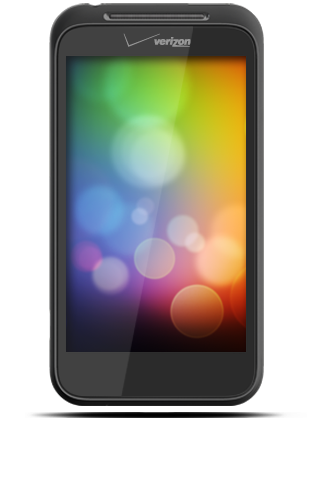 The image of an unknown device  shown above was pulled from a newly updated version of HTC Sync.  The device sports an interesting design which drops the buttons that typically grace the front of all Android handsets. Rather than an Android handset, this configuration may point to a Honeycomb tablet. Honeycomb tablets like the recently announced Motorola Xoom are not required to have front-facing buttons. This upcoming Honeycomb version of Android is optimized for tablet devices and, as such, has moved most of the navigation to the touchscreen instead of buttons. Though it may be a tablet, the top center placement of the logo suggests otherwise.

Also pulled from this sync software was an image of the rumored HTC Merge and the Thunderbolt, a 4G handset confirmed by Verizon at CES. Because of its origin, its is a possible that this mystery HTC device is merely a placeholder for another not-yet-named handset or even a tablet device. The presence of a Verizon Wireless logo, though, suggests this is the representation of an actual device and not a generic mockup.

If it is a Honeycomb tablet, it could be the HTC Scribe. The Scribe is rumored to be a 7-inch tablet possibly with a dual-core Tegra 2 processor, 1280×720 resolution, 2 GB of internal storage, 32 GB microSD card and Android 3.0. No word on whether this tablet is slated to arrive on Verizon, but it is expected to be announced next month at Mobile World Congress in Barcelona. Anyone else care to guess what this mystery device may or may not be?

CES 2011 saw Android on virtually any type of device you could think of. From the obvious smartphones and tablets...