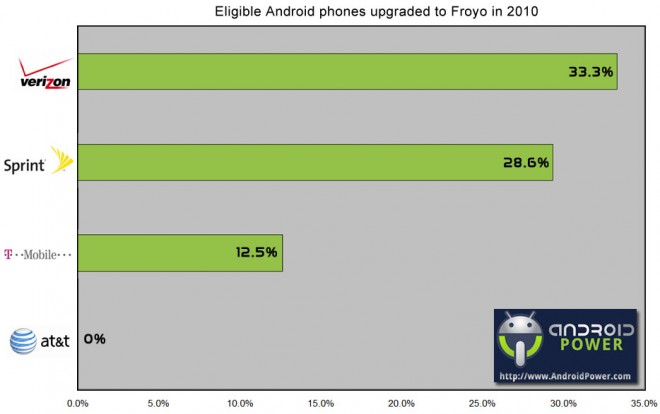 We know that after an Android smartphone-maker has finished polishing a software update for a particular Android device, it then goes on to the carrier for testing (and bloatwaring). This testing can take a while, and can result in even greater delays in getting it to the user. So which carrier and handset maker brings updates to their customers the fastest? Read on to find out.

Of the four major US carriers, Verizon has hands-down been the best of them all. In fact, 33.3% of all Android phones on Verizon got the Froyo update in 2010, and that covers a wide variety of devices. Sprint is runner-up, giving us all they have with a whopping 28.6% of eligible Android phones receiving Froyo last year.

Now that may not sound like much, but when you get down to T-Mobile and AT&T, it’s quite a bit. Magenta managed to update only one device to Android 2.2 within the first 6 months out of 8, giving it 12.5%. But it’s really AT&T that should be ashamed, as they hadn’t updated one single Android device in the last 6 months of the year. Apparently they are to blame for the Dell Streak’s lack of updates, and we already know how Sony Ericsson feels about their X10 on AT&T. Hopefully this will be an overall better year for  AT&T. It has to be, as they no longer can rest on that iPhone exclusivity they so enjoyed.

It’ll be interesting if these numbers change on Verizon, as they have a new toy to sell now. Will their Android support slow to a crawl now that the iPhone 4 is about to run wild? We don’t think so, but Verizon’s marketing push behind the iPhone might be reason to worry just a little.

As far as handset-makers go, HTC wins overall, having 50% of their devices upgraded in 2010. HTC has an average time-to-update cycle of 56 days. That’s pretty impressive, especially when you consider the number two manufacturer, Motorola, only got 15.4% of their devices updated to Android 2.2 within the same year. That said, the average waiting time for Moto devices was slightly shorter than HTC’s, at 54.5 days.

Samsung, oh Samsung. The only device that Sammy released in 2010 that received an Android update, and fit the criteria of the report, was the Intercept. That gives Samsung a score of 11.1%, and an average waiting time of 159 days. Whoo. While it’s not really looking good for them now, I’d imagine that Samsung will deliver the goods to their Galaxy S variants in due time. It’s been a while, but it’ll happen eventually. Let’s just hope we don’t see the Vibrant 4G before these updates occur.

So if you’re on Verizon rocking the Droid Incredible, you may not know it, but you’ve been spoiled in the best way possible.

The numbers you see here are brought to us by JR Raphael of Computerworld on his blog, Android Power. We won’t get into his methodology, but if you’d like to know it, hit up the link at the bottom.

To get all the information from the report, hit up the link below. Great read.