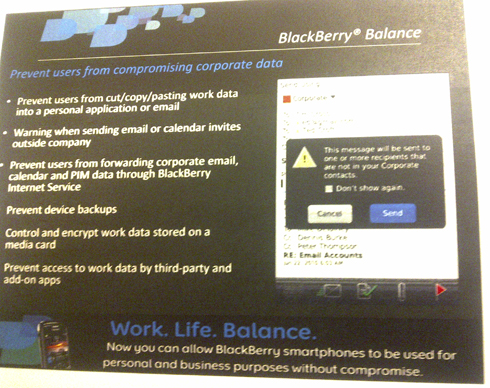 RIM announced an update to their user-liable feature in BES 5.0.2, naming it “BlackBerry Balance” yesterday in Boston. BlackBerry Enterprise Server 5.0.3 basically allows office monkeys to buy their own BlackBerry, and use it as a personal as well as a professional device while staying secure enough for the IT guys. This is done by ensuring everything business stays untouchable by personal data and apps, and along that vein, data saved on the media card can be encrypted (such as sensitive photos and documents). Enterprise admins can still remotely wipe sensitive stuff if needed, and now end users can’t even copy and paste work data into personal e-mails. It’s a two-way street though, as personal users can keep their data intact after a wipe, and Balance allows admins to remove policies if you ever want to take your BlackBerry back.

BlackBerry Balance stands to be the major gateway through which RIM addresses both consumer and enterprise needs at the same time. Obviously BlackBerrys have been moving into the consumer space organically at their own pace, but Balance will be the first product from RIM that specifically addresses that transition. Competing smartphone platforms like iPhone and Android are trying to work the other way around by moving from consumer to enterprise, but building a secure, reliable infrastructure that bigger companies can depend on to manage their devices will take a lot of work. Small-to-medium businesses may make do with relatively lax security for the sake of a more fun phone, but the major corporations will take a lot of convincing to switch, especially if RIM is smart by providing added flexibility to existing infrastructure with stuff like Balance. Security aside, Balance also enables enterprise to save money by offloading hardware costs onto employees. Sure, they have to let those users do more or less what they want with their BlackBerry, but there doesn’t seem to be any loss of security as a result.

Anyway, BES 5.0.3 is launching soon with the new features – we’ll keep you posted when it goes live.