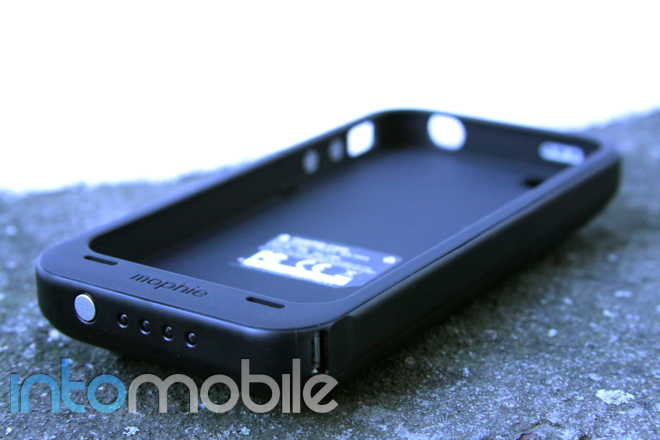 We first caught a glimpse of the Mophie Juice Pack Plus for the iPhone 4 last month, and I called it the first charging/case solution for the Apple smartphone that wasn’t totally ugly. It’s true. Last week at CES, I was handed a demo unit by the kind folks at Mophie and I’ve had a week to test it out now. So far, so good. The Mophie Juice Pack Plus got me through an entire day at CES. It might not be saying a lot, but when your day starts at 7 a.m. and ends well past midnight while spending the day trying to latch onto AT&T’s weak signal, it’s impressive.

The Mophie Juice Pack Plus adds considerable size to the iPhone 4, but it’s to be expected from a case that doubles as a battery pack, too. It has a soft-touch coating and rubberized sides. On the bottom of the case, you’ll find a button similar to the battery indicator on Macbooks. You push the button and a series of lights turn on to show you just how much power is left. At the lower-left corner, there is a small standby switch. It powers the case on and shuts it off and has a red and green indicator to tell you which mode you’re in.

The case is very easy to install. It’s made of two pieces: you slide your iPhone into the base, and the top slides over your iPhone and snaps closed.

Mophie claims that the Juice Pack Plus will double the battery life of your iPhone 4. Now, the smartphone’s battery is excellent enough that it should get anyone through the day, but for added juice it seems to do the job exactly as claimed by Mophie.

There are two ways to use the accessory: you can have it turned on continuously and your iPhone 4 will use it as its primary source of power before using its own battery, or you can put the case on standby until your iPhone’s battery is out of juice. The latter is what Mophie recommends in order to double your battery life. You simply put the phone in the case and leave the switch off – when your iPhone 4 needs more power, you click the switch and you’ll hear the indicator on your phone as you would when you plug it into any other power source.

On a full charge, I’ve noticed that the Mophie Juice Pack Plus will fully charge an iPhone from 20% while retaining about a quarter of its own battery life. When it’s completely dead, the case takes about three or four hours to fully charge. It seems like a lengthy charging process, but it hasn’t been fully conditioned yet and I expect it to improve dramatically as days go by.

If you’re looking for a new case and a battery pack as well, you could do worse than the Mophie Juice Pack Plus. Although it adds to the size of the iPhone 4, it’s not so bad that it feels cumbersome at any point. If you’re going to be away from a charger or power source for a while, this case will get you through another day in my experience. There is also the air version which has metallic sides but is only 1500mAh and slightly smaller.

Apple confirmed today that it is nearing the 10 billion download milestone for the iOS App Store. The Cupertino company...