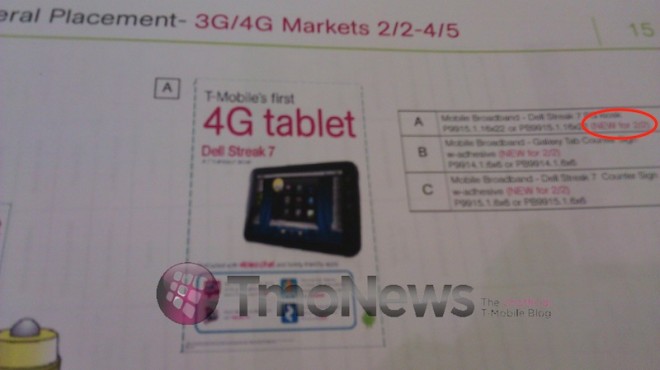 The Dell Streak 7 was announced nearly two weeks ago while we were at CES, and we caught a brief and distant look at the device during T-Mobile’s press conference. While no release dates were mentioned, it looks like we might be seeing the new tablet sooner than later. A leaked image of promotional materials from T-Mobile shows that the Dell Streak 7 may be launching February 2.

Additionally, a source says that the Samsung Galaxy Tab is hitting end-of-life at the end of January. If true, it’s a pretty brief life span for any device to be available for only three months or so. But with the coming of new and significantly better Android tablets – tablets that feature Android Honeycomb – it’s no surprise to see the Galaxy Tab fade into oblivion.

The Dell Streak 7 is going to be a worthy successor. It supports T-Mobile’s HSPA+ network, has a 1GHz Tegra 2 dual-core processor, a 5MP rear camera and 1.3MP front-facing camera for video chats, but is only running Android 2.2 Froyo. Still, it’s not a shabby device for those who want to jump on the Android tablet bandwagon and are fond of T-Mobile’s services.

However, if you’re not in a huge hurry to grab an Android tablet for T-Mobile, you might want to wait until the LG G-Slate is released to see which tablet might suit you best.

It looks like Apple is preparing a subscription service for the iPhone and iPad for digital magazine and newspapers but...