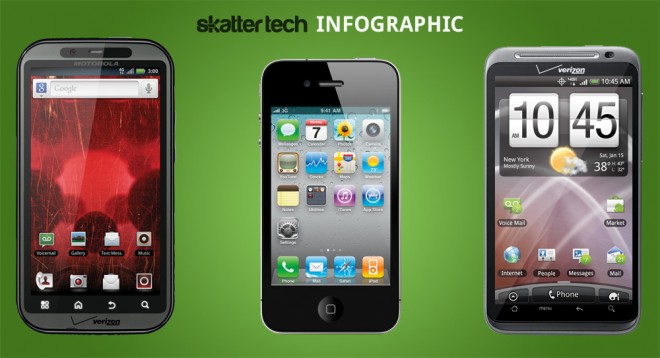 Verizon is going to have one killer line-up soon with a number of powerful smartphones: Apple’s iPhone 4, the Motorola Droid Bionic and the HTC Thunderbolt. With so many smartphones, and little time to read about them all, why not pit them head-to-head in infographic form? It’s my favorite way of comparing stuff, that’s for sure.

Of course, the iPhone 4 is going up against devices that haven’t been released yet, and while it also hasn’t officially made its debut on Verizon, little has changed since its launch last summer. Some strikes against the Apple smartphone are the lack of Adobe Flash support, no turn-by-turn GPS navigation and the lack of LTE compatibility.

See the image below to determine how they stack up!

Before you begin jumping for joy, this is nothing but an unverified rumor. It just happens to be a good...