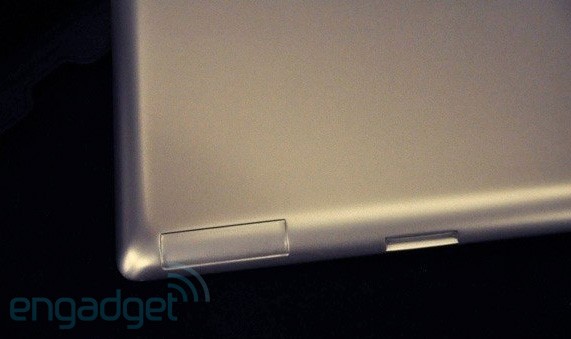 Those of you excited about the Verizon iPhone 4 might want to hold out on getting one in order to see what the iPhone 5 has in store. According to the latest batch of rumours, the iPhone 5 will have a new A5 multi-core processor (based on Cortex A9). For graphics,  the iPhone 5 will use the PowerVR SGX543 by Imagination Technologies according to some clues in the iOS 4.3 beta. In terms of connectivity, a Qualcomm chip will handle both CDMA and GSM networks, so no need to worry for a wait, Verizon customers. Sadly, LTE isn’t in the picture so far, but we’ve got our fingers crossed. The launch is expected around sometime this summer.

There’s also the iPad 2, for those wondering what Apple will bring to combat the army of Android devices coming out of the woodwork. We’ve already heard speculation about a 2048 x 1536 screen resolution and twin cameras, but these latest rumours suggest the iPad 2 will have a dedicated SD card slot (shown in the casing shot above), and will have the same dual-mode connectivity as the iPhone 5. The iPad 2 is likely to land in April, and we’re already seeing the likes of Best Buy list models internally for $599.99 and $699.99.

The new info on the iPhone 5 is great and all, but there’s a lot more hinging on the iPad 2’s success. The original iPad popularized the tablet form factor, and now that competitors like RIM, LG, Samsung, and Motorola are catching on, Apple has some territory to defend. iOS 4.3 looks pretty damned cool, with a variety of multitouch gestures which hearkens to the Mac experience, and plugging holes like a front-facing camera for video calling is a no-brainer. I’m curious to see just how much more horsepower these new chips will provide the iPad, and what kind of doors that opens for the rich iOS app environment. I guess we’ll see, eh?

Update: Some conflicting information from Chinese manufacturing partners suggests that it’ll be a single-core A8 processor in the iPhone 5, so don’t get your hopes up too high for dual-core. A well done single-core processor could do just as well as an equivalent dual-core processor, but either rumour is pretty nebulous right now.