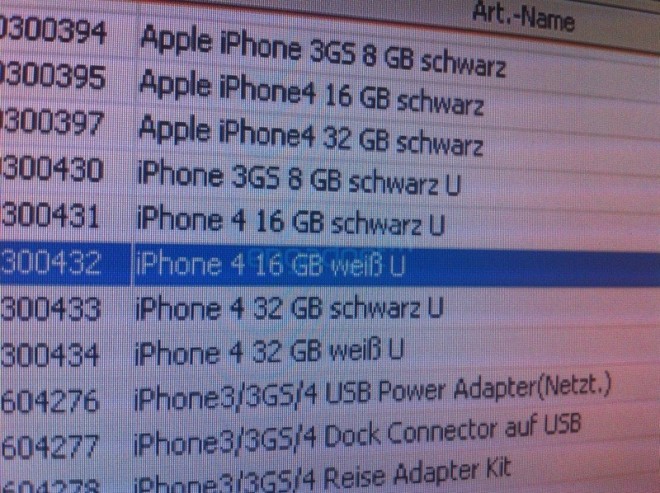 The unicorn of the smartphone world might be coming in the spring after all; Vodafone Germany’s inventory is listing the white iPhone 4 in both 16 GB and 32 GB flavours. While that doesn’t guarantee availability, it does indicate a carrier expectation. If it does come out, I bet it won’t be too long before an iPhone 5 announcement, if not simultaneously to maintain some level of lingering interest in the outbound (and likely price-reduced) model.

Of course, there’s absolutely nothing special about it; it’ll still have the same brilliantly sharp display, 5 megapixel camera on the back, video conferencing camera on the front, run a new multitasking OS, and the usual fixings like Wi-Fi, GPS, Bluetooth, and 3G. Rumours say the only reason it’s been taking so long is because of some colouration issues at the factory level.

Anyone who really wanted to turn some heads would have by now slapped on a skin or done an elaborate casing mod to make their iPhone look like the white version that has been promised since the summer, but never delivered. Much like the Verizon iPhone, I’m going to miss the ridiculous amount of attention given to such insignificant product, especially the running gags that came out of it.