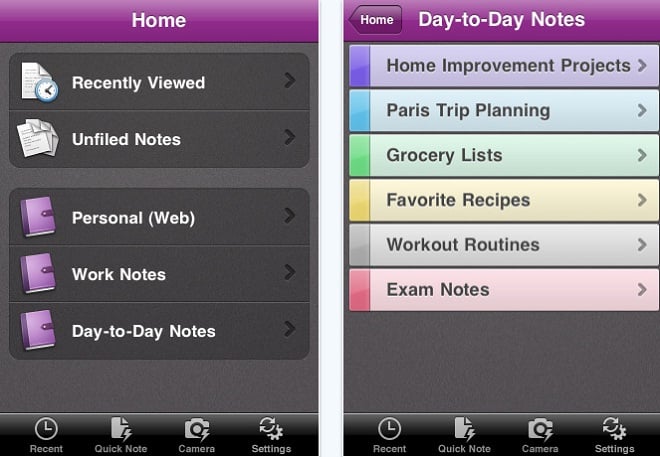 While Microsoft is hoping to derail the iPhone and iOS with Windows Phone 7, that doesn’t stop it from developing apps for Apple’s mobile platform. The software giant has just released its OneNote app for the iPhone and iPod touch.

The OneNote iPhone app lets you keep track of your notes and lists on the go with a program that can sync cross-platform. Think of it as the Evernote from Microsoft but with stronger integration with the software giant’s services like Outlook and Windows SkyDrive.

According to Microsoft, this includes:

? Create flexible notes that can include text, pictures, bullets, and checkboxes
? Check To Do items off on the go
? Save time with quick access to your most recent notes
? Work with confidence—OneNote Mobile automatically syncs your notes with Windows Live in the background
? Organize your notes into sections or create new notebooks using OneNote 2010 or OneNote Web App and access them from your iPhone

This isn’t the first time we’ve seen Microsoft develop for the iPhone, as the Bing app was actually one of Apple’s most-downloaded programs last year. It’s a smart strategy to get users used to your online service, no matter which platform they’re currently using.

The overall goal, of course, is to get users so comfortable with OneNote or Bing that they seek a platform that has these integrated at a deep level. That would be Windows Phone 7, which does an incredible job of using Microsoft’s services.

So, any of you tempted to check out the OneNote iPhone app? What’s your favorite note-taking app?

I generally use Google Docs or just Gmail to keep my notes together on the go but these aren’t the best way and I’m looking for a better solution. Give me a few suggestions and I’ll try them out, friends.

Knocking a king off the throne has never been an easy feat, and in the app world, Angry Birds was...