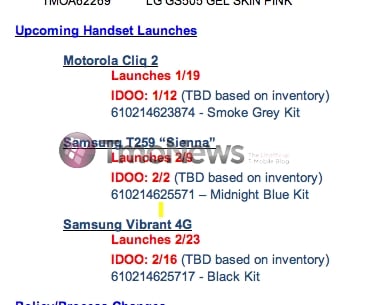 The Samsung Vibrant 4G may be landing on February 23, according to some leaked internal documents. From what we’ve already seen, the new variant will add HSPA+ 21 Mbps connectivity, Android 2.2, and a front-facing camera to the original Vibrant. The rest of the specs will probably stay the same, like the 4-inch WVGA Super AMOLED screen, 1 GHz processor, 5 megapixel camera with 720p video recording, Wi-Fi b/g/n, GPS, and 16 GB of internal memory.

Folks who were stung by the lack of Froyo updates on the Vibrant will probably be not so happy to see the Vibrant 4G, but anyone who held out will be glad that they did. Although the “4G” classification is a little dubious, at least they aren’t charging extra for HSPA+ like Bell is up here in Canada.

Anyway, a picture of the device itself has supposedly bubbled up, which would support the impending release. Anyone particularly excited to pick this up? I’m not sure why one would be more inclined to grab this for HSPA+ goodness instead of an HTC G2 – maybe the bigger screen is a significant selling point? Personally, I’d rather the physical keyboard.

We know that Acer will be bringing out Android 3.0 Honeycomb tablets this year but the company has released a...