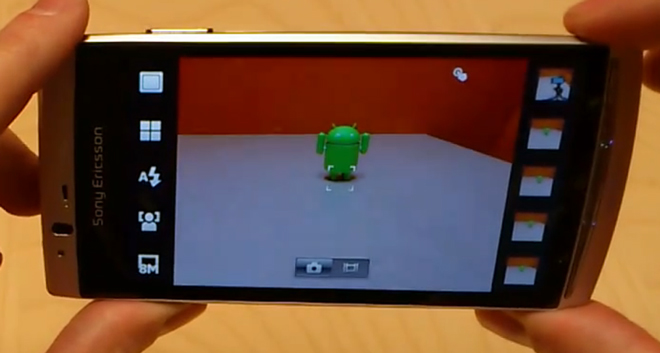 The Sony Ericsson Xperia Arc caught some attention at CES, and today we’re getting a closer look at how the 8 megapixel camera fares. It features an Exmore R sensor, f/2.4 aperture, white balance metering, image stabilization, and can rapid fire pictures like nobody’s business. The UI of the camera app is significantly improved, with windowshade-style menus to the left and right that can slide all the way open for gallery previews on one side, and settings on the other, or you can hide ’em altogether. It’s worth noting that the demo video itself was shot on an X12, which is pretty impressive if you turn on 720p HD in the video below.

The Arc is more than just a snazzy camera, though; it’s got a big 4.2-inch 850 x 480 display, 1 GHz processor, 512 MB of RAM, and runs Android 2.3 Gingerbread with a customized TimeScape app for viewing contacts and their social network updates. The Arc also has an impressively slim profile, measuring a scant 8.7 mm. The usual stuff like Wi-Fi, GPS, and 3G are also included.

As impressive as this video is, the PlayStation phone seems to be garnering a lot more hype, probably because it’s pulling on an established and respected history in gaming, while the Arc is an evolution of the X10, which left a lot of folks sour and unimpressed, especially once it was announced that it wouldn’t get Android 2.1 Froyo. It seems to me like Sony Ericsson has fixed most of the problems with the X10, but I would hope they churn the OS updates a bit more quickly this time around. What about those of you burned by getting an X10 – are you willing to give Sony Ericsson another shot with the Arc?