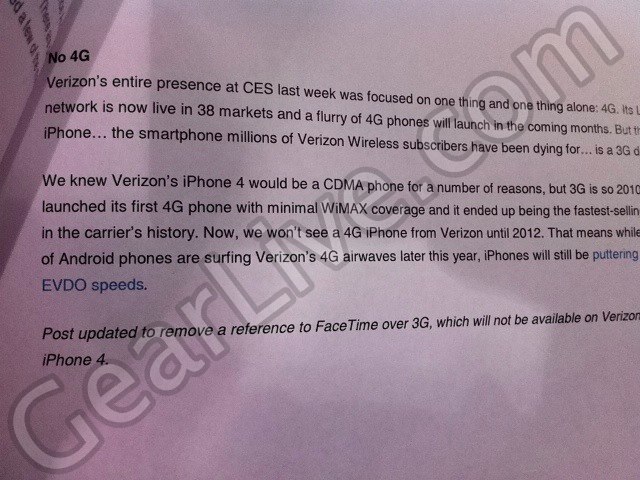 As much as folks are frothing at the bit to ditch AT&T for Verizon and their iPhone 4, retail partner Best Buy is sticking by Big Blue. Best Buy training documents have revealed that they won’t be carrying the Verizon iPhone 4, citing “only” 3G isn’t good enough for newer products, especially when VZ is spending so much marketing power on LTE 4G products.

The iPhone 4, on the weird off-chance you’ve never heard of it, packs the highest-resolution screen we’ve seen on a smartphone to date (960 x 640), and has an application market bigger and badder than any of the competitors. The 5 megapixel camera takes HD video and great stills alike, a front-facing camera is there for video calls, plus it runs an OS that supports multitasking,

That being said, we are expecting a white iPhone 4 at Best Buy on February 27, which suggests it’ll be for AT&T, rather than Verizon as we have suspected for some time. Will anyone really miss the Verizon offering at Best Buy? Probably not since there are plenty of AT&T, Apple, and other third-party stores to go around. The interesting part about this is how vehemently Best Buy is training their staff to defend the AT&T iPhone 4 and downplay Verizon’s offer. It’s mostly the same thing a device perspective, barring personal hotspot capabilities, but even that is coming to GSM models sooner or later.

The Verizon iPhone 4 will be available on February 10, but if you’re having trouble making the leap, be sure to check out our comparison chart.

Fan-made Android video ad shows too much time on hands

We've seen this fanboy war go back and forth for some time now. As Android grows, more and more of...