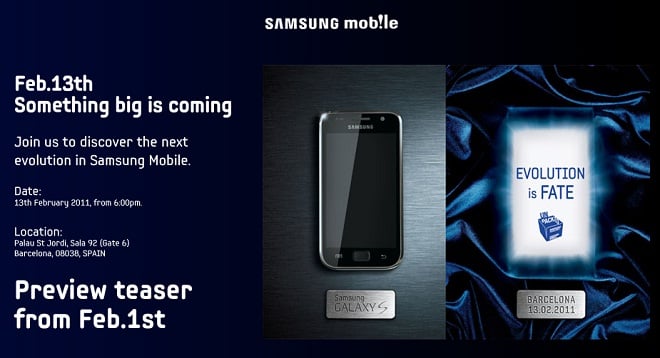 We know that Samsung will show off the Galaxy S2 at Mobile World Congress in a few weeks but we’ve just heard another tidbit that the smartphone will be capable of full 1080p HD video recording.

This tidbit comes from TechRadar, which said the Samsung Galaxy S2 will pack an 8-megapixel camera that can do full 1080p HD recording. This is a noticeable bump from the current crop of Samsung high-end smartphones, which top out at 720p HD recording.

The rumor also says that the Samsung Galaxy S2 devices will be able to do 1080p HD playback on the device, which should look good on the Super AMOLED Plus screens we’ve seen on the Infuse 4G.

You can also expect a dual-core chip (it’s unclear if this will be a Tegra 2 or the company’s Orion chipset), 1 GB of RAM and, hopefully, Android 2.3 Gingerbread. We’re also pretty sure that it will have support for 4G LTE networks around the world.

It’s looking like 1080p HD recording will be a standard in the next generation of superphones in 2011, as the LG Optimus 2X can also do this thanks to its Tegra 2 processor. Let’s just hope many of these come with HDMI out cables and expandable memory so you can fully take advantage of that high-definition recording.

Many of use are just expecting the aforementioned Infuse 4G to be the next Galaxy S2 but with full 4G LTE support and a few spec bumps, like the 1080p HD recording. The Infuse will have HSPA+ support, which AT&T is labeling as 4G.

The hot new crop of smartphones will be coming fast and furiously at Mobile World Congress, as we’re also expecting to see the much-talked about PlayStation Phone being shown off and there’s bound to be some surprises. You can follow all of the latest MWC news in this section. Bookmark it now, as it will come in handy.

RealPlayer for Android Updated with Playlist Support and Homescreen Widget

The RealPlayer media client for Android has been updated with a bunch of UI tweaks, plus a new homescreen widget...