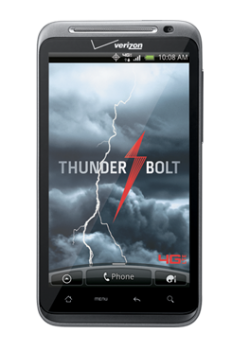 We just heard the news that Best Buy would be skipping the Verizon iPhone when it’s launched next month, but the retailer may be carrying the 4G-toting HTC Thunderbolt instead as their exclusive Verizon handset.

It looks like Best Buy is going 4G, which is why the Verizon iPhone may not have made the cut. The HTC Thunderbolt, however, will take advantage of Verizon’s 4G LTE network, and data speeds on this device should demolish the speeds you’ll get on the carrier’s upcoming iPhone variant. That said, the HTC Thunderbolt could have benefited from some better internal hardware.

The Thunderbolt, while a gorgeous device, still has last generation written all over in terms of internal hardware. It’s not a bad phone in the least bit, but there’s almost no competition when you sit the thing next to the Droid Bionic. The Thunderbolt is basically a 4G Desire HD, and while the processor on the thing is in no way slow, it’s prime time for dual-core phones right now, and the Thunderbolt falls short with a single-core processor. Then again, this is HTC we’re talking about, and we have little doubt that the Thunderbolt will be a successful handset.

The Thunderbolt comes with a 4.3 inch display, 1GHz Qualcomm chipset, 8GB internal memory and a 32GB pre-installed micro SD card. The handset is running Android 2.2 Froyo with HTC Sense, which is acceptable enough, but we were definitely hoping for some Gingerbread action on board. Nonetheless, we know that Verizon and HTC have a good track record on updating their phones, so it may not be too long before the handset gets some Android 2.3 loving.

While still impressive as a phone itself, the iPhone just can’t go toe-to-toe with the newer handsets shipping with dual-core CPUs and 4G support. While that certainly won’t stop Verizon from selling millions of these things, those who have done their homework may end up going with a device like the Thunderbolt.

Anyone thinking of grabbing of these things once it’s released?