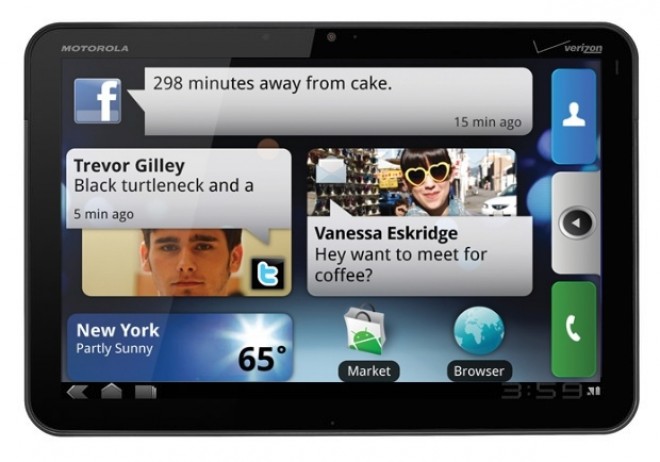 Remember the Motorola Xoom? You know, the Android-powered tablet that stole the show at CES earlier this month? The world’s first-to-market Android Honeycomb tablet is packed to the gills with high-end features, and we were happy to see that it would be unmodified, stock Android OS. While that’s great news for early adopters, we’re hearing today that the Xoom may get the MotoBlur treatment somewhere down the road. Motorola’s director of Android product management, Jonathan Nattrass, told CNET UK that MotoBlur is all about bringing a social aspect to the OS, and that it will eventually be updated with the UI.

While some people may enjoy the social aspects of MotoBlur, others might see the aesthetics of the custom skin as a little too cartoonish. If this does turn out to be true, the Honeycomb version of MotoBlur may get a cosmetic refresh for the flagship Motorola tablet. Unfortunately, no matter how much MotoBlur gets tweaked, it’s still going to cover up the stock Android Honeycomb experience that Google has worked so hard to put together.

It’s not that MotoBlur is bad, it’s just not good. At all. Devices like the Devour, Cliq XT, and Backflip never saw great sales numbers, even if they were more or less entry-level devices. MotoBlur in its purest of form is filled with constantly updating social networking widgets that can drain the battery quickly. While these widgets can be removed, the MotoBlur UI as a whole is very kid-like, and looks like it was designed with pre-teens in mind. Motorola reworked the UI with the Droid X and Droid 2, which was much more bearable, but we’re not sure how the custom Motorola skin will be received on the tablet.

So, potential Xoom users, does the possibility that one of the most anticipated tablets of the year may receive an update that may change the experience for the worse? Or, are you still hoping that the Xoom ships with the Android experience that Google intended?

[Update]
Rumor debunked, people. The Xoom is safe from MotoBlur, it seems. Motorola updated us with this info:

To clarify, Motorola XOOM is a Google Experience Device and the first tablet to incorporate Android 3.0 Honeycomb. As such, Motorola Mobility has worked closely with Google to develop and optimize the Honeycomb OS on XOOM, and has no plans to customize the software with MotoBlur.

GadgetTrak has recently launched a new security suite for Android and BlackBerry, which including remotely wiping contacts from the device,...