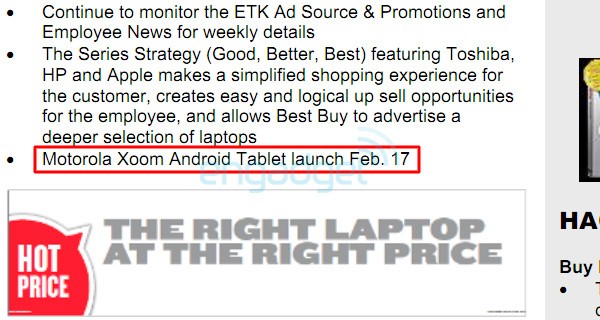 A leaked Best Buy document suggests the Motorola XOOM will launch at Best Buy on February 17th. This is the first time that we have seen a date mentioned for the launch of this highly anticipated tablet, other that the broad Q1 2011 mentioned by Motorola during the official unveiling of this tablet device. According to the documentation, the XOOM will ship with 32 GB of onboard storage. The same tipster confirmed that the tablet will arrive at Best Buy one day before its big launch and will hit retail shelves for $699, $100 less that Verizon’s rumored price of $799.

Before a $699 or a $799 sticker price knocks you over, remember that these prices are full retail prices, not subsidized prices which will be several hundred dollars less with a two-year customer agreement. These prices also line up with the retail cost of the Apple iPad which starts at $629 for the 16 GB iPad with WiFi + 3G and climbs $100 for the 32 GB model and $200 for the 64 GB model.

For those following specs, the XOOM features a 1 GHz dual-core Tegra 2 processor, 10.1-inch display with 1280×800 resolution, 2 MP front-camera, 5 MP rear-camera with 720P recording, and Android 3.0 honeycomb. With its 10-inch display and high-end specs, the XOOM will be the first major competitor to Apple iPad.

Apple unveiled a new advertisement that features both the AT&T and the Verizon iPhone 4 with the tag line "Two...