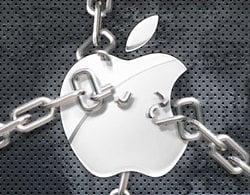 The iPhone and iPad had been relatively secure device – if we don’t count that huge exploit in which tens of thousands of e-mails were compromised via AT&T’s network – but they could still use a bit of work. So, Apple has employed former NSA analyst, David Rice, to help bolster security and give Apple a little more cred with the security and IT crowd.

Here’s a little bit of info on Rice as reported by AppleInsider:

Rice graduated from the U.S. Naval Academy in 1994 and received a master’s degree in Information Warfare and Systems Engineering from the Naval Postgraduate School. He previously worked as a Global Network Vulnerability analyst for the National Security Agency and as a Special Duty Cryptologic officer for the Navy.

Currently, Rice serves as the Executive Director of The Monterey Group, a strategic consulting firm, and Consulting Director for Policy Reform at the U.S. Cyber Consequences Unit. Rice is also the author of “Geekonomics,” a 2007 book which likens software security vulnerabilities to weakened bridges and other physical infrastructure.

Impressive, and he certainly sounds like the right man for the job.

While BlackBerry had been the name in mobile devices for enterprise users, many companies are beginning to switch to iOS devices like the iPhone and iPad. One major downside has been security with iOS, and although it has come along way since Apple introduced Microsoft Exchange services in 2008, it could still use some help.

Several corporations said last year that they intended to adopt the Apple iPad for regular use, and that trend is sure to grow this year. The addition of Rice to the Apple team will undoubtedly give Apple what it needs to thrive in the corporate and IT space – perfect for the growth it will see this year with Verizon.

While Google announced their cloud-based printing service in April of 2010, they today passed a huge milestone by offering the...