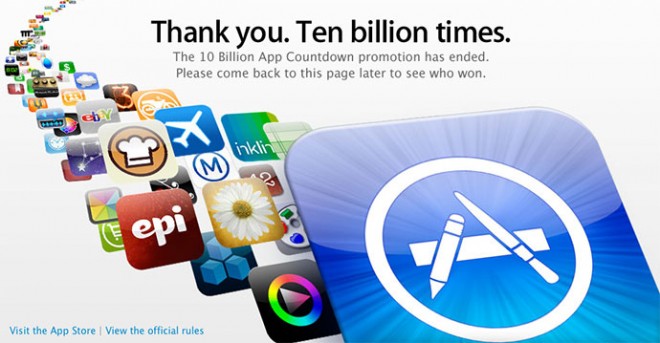 Apple surpassed its 10 billion App Store downloads today and awarded its $10,000 iTunes gift card to Gail Davis of Orpington, Kent, UK. The mother of two teenagers, Davis won with the download of the free Paper Glider app which was closed the contest at 9.30AM UK time, or 1.30AM PST/4.30AM EST. The app was downloaded by one of Davis’ daughters using an iPod touch that was setup on the mother’s Apple ID. Ironically enough, Davis was not aware of her winning status and hung up on Apple when an executive from the Cupertino company called to congratulate her.

According to Cult of Mac, which had an exclusive interview with the UK winner, Davis received a phone call from, Eddy Cue, the VP of iTunes. Believing that the phone call was a prank, Davis reportedly said, “Thank you very much, I’m not interested” and proceeded to hang up on the Cupertino executive. Her two daughters informed her that the call may have been legitimate as they had been downloading applications when the countdown ended.

Davis claims she “had a moment of panic” and attempted to contact Apple using their helpline. A customer service representative tried to help her but was unable to assist in this unusual circumstance. After a few tense hours for the family, a second Apple executive called back and the misunderstanding was explained in what will undoubtedly become a memorable family moment. As expected, Davis’ daughters are not wasting any time and are already planning which applications to buy with this new found bounty. Davis also hinted that she and her husband may finally update their aging iPod Nano’s so they can join in with the fun. Congratulations to both Apple for reaching this milestone and to Davis and her family for this win.

[Via Apple and Cult of Mac]

The ever elusive white iPhone 4 has been making strange appearances in different retail systems lately, and now it looks...