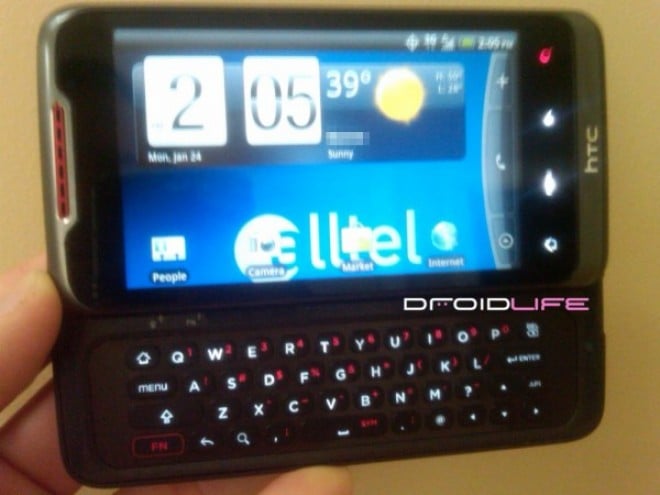 We were beginning to think we’d never hear of this handset again, but at long last, the HTC Merge has re-emerged from the shadows. Initially a Verizon handset, the Merge may now instead be headed to regional carrier Alltel.

The evidence that says that the Merge is headed to Alltel could easily have been faked, as the only indication is that the picture above has the device sporting an Alltel wallpaper. This could easily have been faked, but why? While we weren’t unimpressed with the Merge, we certainly weren’t jumping for joy about it. Nonetheless, if this is true, we’re just happy to see the handset released on any carrier.

It was back in August 2010 when we first caught wind of this Android smartphone, and since we’ve been treated to little more than whispers and rumors. We thought we’d see an official announcement from Verizon during the Droid Incredible relaunching party, but that date came and went with no Merge to be seen. The handset even made it to Big Red’s website, only to be pulled shortly afterward. We’re still not sure why the Merge didn’t make the cut for Verizon, as it seemed ready to launch. Could it be that Verizon was looking to focus more on their 4G handsets, and that the Merge just couldn’t go toe-to-toe with the competition? Either way, we have a feeling that Alltel will be much more transparent about the handset’s incoming.

Let’s make one thing clear about this handset: it’s no chump. Running the 800MHz new-gen Qualcomm MSM7X30, which is found on the T-Mobile G2. With many handsets running 1GHz processors these days, we wondered how a 800MHz CPU could run with the big dogs. Turned out, benchmark tests showed that the CPU is faster than some 1GHz processors found on phones like the Nexus One and EVO 4G. The handset also packs a 5 megapixel camera, as well as a very nice looking slide out QWERTY keyboard with HTC Sense running on top of Android 2.2. Updating to the latest Android version? That may be a bit of a problem down the road.

So here’s to Alltel grabbing a great phone we’ve been looking forward to seeing on shelves somewhere.

While we're still completely in the dark about the Atrix 4G launch, a new rumor suggests that retail units will...