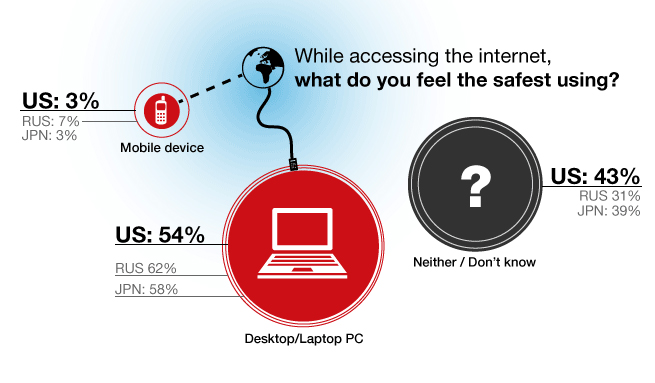 Opera and YouGov recently released the results of their survey regarding popular perceptions of online security and privacy. Compiling data from over a thousand respondents in each of the U.S., Japan, and Russia, it was concluded that having internet privacy violated to the point of fraud was a bigger daily worry than losing a job in Japan and the U.S., and brankruptcy in all three countries. In the U.S., online privacy was almost as much of a concern as getting in a car accident. Of particular interest to us mobile people is this section of their lengthy infographic (shown in its entirety below).

Across the board, most people feel more secure browsing the web on a desktop computer than a mobile device, which strikes me as odd. There are a lot more viruses built for computers, a bigger mountain of data at risk, and a lot more ways to get in, while a smartphone has relatively limited resources, capabilities, and access. To be fair, a solid 40% couldn’t even tell the difference in security, so I imagine it’s more an issue of informing the public about mobile browsers.

So who are people worried about snooping around their online data? For the U.S., the government is the big one (35%), but Russians are way more concerned about social networking sites (38%), while the Japanese were most worried about shopping sites getting their personal data (33%). In terms of how users protect their data, anti-virus software is hugely popular in Russia (used by 90% of respondents). Japan seemed the least concerned about protection, with only a quarter using safe passwords for their various online accounts.

The international scope of this survey is pretty interesting, and offers some insights into differing priorities, not only when it comes to online security, but also what makes people worried, and what’s worth changing. For example, 40% of Americans had no idea what would make the world a fairer place (versus 20% for Japan and Russia), while Russians are really, really worried about relationship problems on a daily basis (40%).

Anyway, take a look at the graph and let us know if you think it adequately represents your sense of security.

Strategy Analytics: Smartphone sales up 75% annually, 24% of all handsets sold in Q4 2010 were smart

The bean counters over at Strategy Analytics have some new wisdom to share with the world now that most everyone...