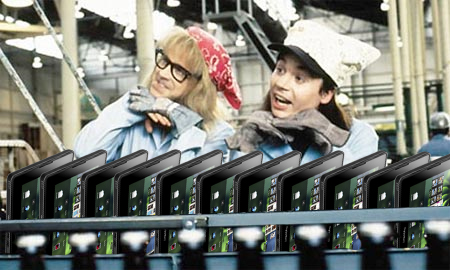 Rumour has it RIM is currently producing 150,000 – 200,000 BlackBerry PlayBook tablets each month through Quanta factories in Taiwan. Apparently RIM sought to make the PlayBook in Taiwan to avoid Chinese knock-offs and keep a lock-down on the security specifications.

If you’ve yet to meet the PlayBook, it’s RIM’s first tablet, running a whole new operating system that excels at multitasking, stability, and multimedia. Specwise, it’s got a 5 megapixel camera on the back, and 3 megapixel one on the front for video calls (both HD-capable), has a 7-inch 1024 x 600 touchscreen, 1 GHz dual-core processor, 1 GB of RAM, Wi-Fi (tethering to BlackBerry for 3G and PIM apps), stereo speakers, and HDMI-out.

We had heard that RIM would be shipping 1 million tablets in the first quarter, with an estimated 6 million sales for fiscal 2011. Just as a point of reference, Apple is currently shipping 6.1 million iPads each month, but to be fair, they’ve got a bit of a head start and a helluva lot more hype behind them. Regardless, given all of the rumours we’ve been hearing from the manufacturing side of things, it sounds like RIM won’t have any supply issues at launch, and by staggering the release of the Sprint WiMAX version, they’ll probably be able to stay consistent through the summer.

The other week, we got a good look at a variety of new BlackBerrys coming down the pipe, but as...