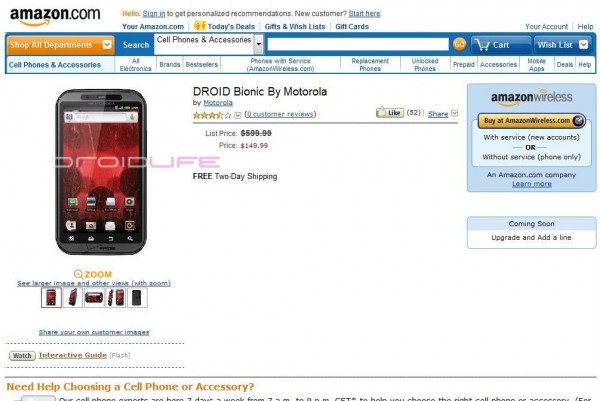 The Droid Bionic might be launching pretty soon as it popped up on Amazon Wireless’ system very briefly revealing a $149.99 price tag. The Android device will be packing some LTE 4G capabilities along with NVIDIA’s new dual-core Tegra 2 processor. We had a pretty decent, albeit brief, hands on with the Droid Bionic at CES 2011, but we came away somewhat impressed.

The Droid Bionic features a 4.3-inch capacitive touchscreen, runs Android 2.2 (from what we’ve seen so far, hopefully it will launch with Android 2.3 Gingerbread) and has 512MB of RAM.

The pricing of this device, if true, is really attractive. After all, most of the top-end Android devices so far have been going for $199.99 with a two-year contract from Verizon. Could this just be a pricing exclusive from Amazon, or will Verizon be dishing this out for a buck-fifty, too? And if both Amazon and Verizon price this thing at $150, will it be because of the iPhone?

If you're tired of Google or Bing, you should check out Blekko search for Android and the iPhone because this...