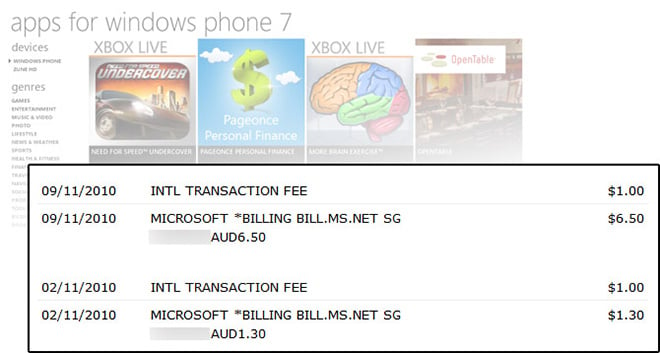 According to Long Zheng of istartedsomething, Microsoft has fixed a Windows Phone billing issue affecting residents of Australia and other regional markets. The billing glitch would levy an additional International transaction fee that would raise the price of applications and games bought by customers in regions outside the U.S. The cause of this error was attributed to billing centers which were not local to the market they were servicing. Australia’s billing center was in Singapore and levied this fee when a charge outside Asia Pacific was processed. This extra charge was not levied against each customer and was triggered by different combinations of bank accounts and credit cards. Microsoft fixed this problem by processing Australian payments in Sydney instead of overseas and presumably sup similar local processing centers in other affected nations.

While Microsoft took care of this billing issue in a clear and prompt manner, its handling of its phantom data leak was not as forthright. The Redmond company confirmed last week a third-party company was responsible for spurious data usage reported by Windows Phone owners. After an independent security researcher fingered Yahoo Mail as the culprit consuming excessive bandwidth, Microsoft finally came clean and admitted that Yahoo! Mail was application causing the bulk of the data problems. Yahoo! also came forth an issued an apology and confirmed that a fix was on the way.

EA is top publisher for iPhone, iPad and Windows Phone 7

Electronic Arts had a good quarter and the results showed that the game maker continues to gain traction in the...