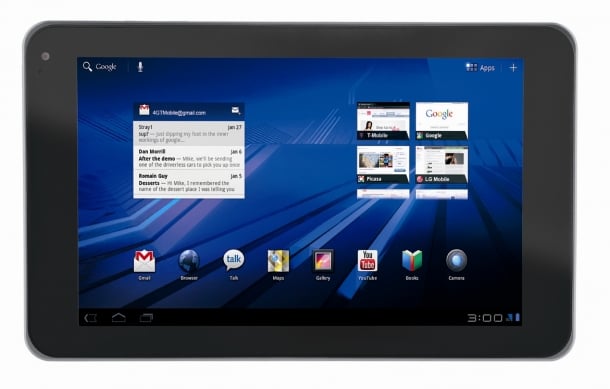 T-Mobile shared some additional details on its upcoming G-Slate tablet from LG. The G-Slate will be an 8.9-inch Android tablet with a 3-D capable, multi-touch display requiring special 3-D glasses. As rumored, the stereoscopic 5-megapixel rear-facing camera is also capable of recording 3D video as well as a 720P HD quality video. A front-facing camera is included for video chat over T-Mobile 4G network. Underneath the hood, the G-Slate will feature a Tegra 2 processor, 32GB of onboard storage and 1080P HDMI out. Best of all the G-Slate will be powered by Android 3.0 Honeycomb.

The G-Slate is an interesting addition to the Android tablet market. It is not as large as the Motorola XOOM, but is slightly bigger than the Samsung Galaxy Tab. The 8.9-inch size was seen in the original netbooks, but it is an unusual size for a tablet. Until we can get some hands-on time, it is difficult to say whether its size is a benefit or a detriment to its adoption

Hardware-wise, the G-Slate shares the same underlying processor as the XOOM, but adds 3D video recording and a 3D display to differentiate itself from the competition. This inclusion of 3D is an untested feature and it is not known how consumers will respond. 3D televisions have been hit or miss in the past with consumers buying into this technology because it is included with the device, not necessarily because they want it. LG, though, is a well-known manufacturer of televisions and it may be using its experience to test out this technology in the tablet market.

Unlike the Samsung Galaxy S 4G which will be available in February, the G-Slate does not have an availability date. When the tablet does launch, G-Slate owners will be able to enjoy 4G speeds in several new markets. Starting February 2nd,  T-Mobile’s HSPA+ network will expand to Georgia including Albany, Augusta, Columbus and Macon, Ga. Other markets include Chattanooga, Tenn., Champaign, Ill.; Lansing, Mich.; and Rochester, Minn.

Additional details on the G-Slate is available on T-Mobile’s website and the full press release is on the second page..