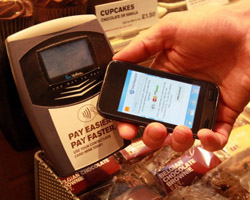 UK mobile operator Everything Everywhere, which is a joint venture between Deutsche Telecom’s T-Mobile and France Telecom’s Orange, announced a commercial launch of a nationwide contactless mobile payments scheme in Q2 2011. The launch builds on top of a long-standing partnership between Orange and UK credit card firm Barclaycard. Orange described the launch as the UK’s “first commercial launch” of the technology that will allow user to pay for goods at participating merchants by waving an NFC-enabled mobile device against a contactless reader.

Over 40,000 stores in the country will be ready to accept contactless payments at launch, including retail outlets such as Pret a Manger, EAT, Little Chef and Co-Op.

There are already 11.6 million contactless credit and debit cards in circulation, of which over 10 million have been issued by Barclaycard and its parent bank – Barclays.

The only problem may be in the wider availability of NFC-enabled handsets, but that’s likely to change with more devices getting the capability that’s already featured in Google’s Nexus S. It is wildly rumored that the iPhone 5 will support contactless payments and we assume more handset makers will jump on board in no time, as well…

Google is looking to beef up its NFC team as the search giant plans to put a major focus on...