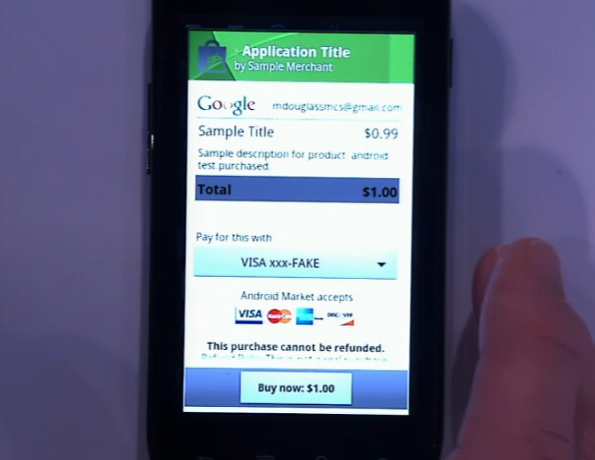 In a move which could spur even more developer interest in the platform, Google said at its Honeycomb event this morning that it would be bringing in-app purchases to Android. The new revenue stream will be available to developers by the end of Q1, and can take as little as five days to implement. The Android in-app purchases will include many virtual goods including new levels for games, virtual goods in the likes of FarmVille to new music tracks for the just-announced Tap Tap Revenge 4. Billing options include Visa, MasterCard, and American Express, and I think they mentioned carrier billing when supported. PayPal and Google Checkout don’t show up on the list of options in that screenshot, but they’re likely candidates as well.

The move should help boost the ailing Android Market. While the store has over 200,000 apps, many reports suggest that users don’t buy as many programs as they do on the Apple App Store, though that may change with a web-based store now in the picture. If content creators can’t earn as much money on Android, then they will naturally gravitate toward the Apple iPhone, even if the little green robot has more users. The ability to do in-app purchases will hopefully change that dynamic, or at least even it out since Apple has had it for the last two years. RIM’s not far behind on this front, having just launched in-app pruchases in the BlackBerry App World today.

However it pans out competitively, in-app purchases is good news for devs looking for a revenue stream, and end-users looking to expand the capabilities of their apps without downloading whole new programs. The Android Market has a lot of free apps, and combined with some ad support, in-app purchases could help them to start making some decent money. We’ll just have to see how many developers take advantage of the option when it rolls out by the end of the quarter.

In its Honeycomb presentation, Google announced a new web-based version of the Android Market. This new website lets users easily...