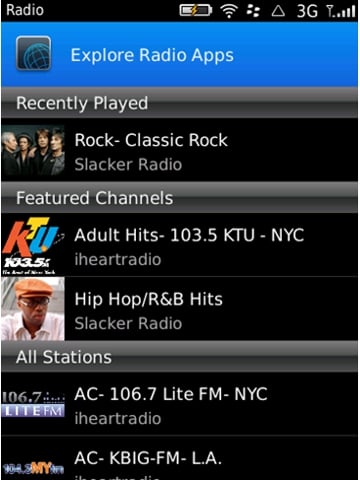 RIM has launched a new app in a limited beta called BlackBerry Radio. It basically jams up streaming music service from apps like Slacker, Pandora and iheartradio, as well as traditional radio networks like Corus into a single, unified discovery mechanism. You can either play the audio streams right through the app, buy songs that pop up, or download the dedicated radio apps if you prefer. The nice thing about BlackBerry Radio is that you don’t have to sign up to an account for all of these various services to tune in; ideal for casual listeners, but if you’re a premium subscriber, you’ll probably want to tweak your custom stations.

Lately, RIM has been getting really good about pumping out their own quality apps. They aren’t exactly mind-blowing, but they’re simple, polished, and address a need with the level of breadth only a manufacturer can provide. It’s good to see they’re not rendering existing software partners useless in this particular case; I felt like the official Twitter app undercut a lot of the third-party apps by being preloaded on BlackBerry handsets right off the bat. Then there was the Podcasts app, which was a niche occupied nicely by Podtrapper for a profitable couple of months. Plus there’s BlackBerry Protect, which basically offered SmrtGuard-style tracking and remote wipe for free. Once RIM puts some serious weight behind News Feeds, I suspect BerryReader will be out of luck as well.

That being said, BlackBerry Radio looks like it’s a much more collaborative setup, which should entice other partners like rdio and Rhapsody to get involved. The app layout is reminiscent of Podcasts, and it wouldn’t be surprising to see it recycled again for a similar conglomerated MP3 store, using, say, Amazon and 7digital to start.

If you want to try out BlackBerry Radio, hit up the Beta Zone. Unfortunately, it’s only available in the U.S. for now, probably because of licensing issues.